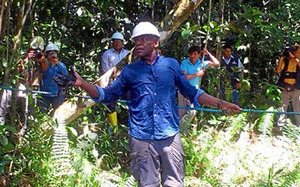 U.S. actor Danny Glover confirmed the contamination of Chevron, while touring one of the pools contaminated oil in the well Aguarico 4 (Sucumbios). Chevron termed this event as a “media show” carried out by Rafael Correa’s regime to discredit them.

Yesterday officials of the Ministry of Communication of the Presidency accompanied Glover, so the actor can see the damage allegedly caused by the company when it worked in Ecuador.

The famous actor of Lethal Weapon became the first celebrity that dug into one of the contaminated pools, as part of the regime’s campaign of Chevron’s dirty hand as President Rafael Correa made ​​last September 17.

“I just witness everything that has happened in Aguarico 4 is not a fraud. No more excuses,” said Glover. The Secretary on their Twitter account issued the statement. Another quote was “is a single planet and must fight to keep it.”

The response of the oil company stated that Correa ‘s regime “continues to organize shows for the media to divert attention from their own responsibilities in the East and the fraud perpetrated against Chevron in the Provincial Court of Sucumbios.”

Final tests for the Monteverde Project