Delays in appeals of protesters in Ecuador, according to HRW 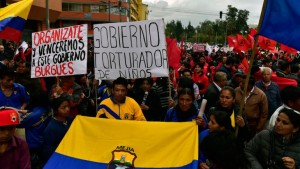 The courts in Ecuador “unduly delay the appeals of protesters” who are in prison waiting for their sentences to be revised under the new criminal law, says the Human Rights Watch (HRW) NGO in a statement.

The entity considers that the Integral Organic Penal Code (COIP), in force since August 2014, is not being properly implemented to avoid “disproportionate” sentences to protesters opponents of the government with charges of terrorism and sabotage.

The HRW studied several casesin which they prove that the revisions are still delaying.

Cases like that of Maria Alejandra Cevallos, a student who was sentenced to four years in prison for sabotage after “breaking” in the state channel during the police protests of September 30, 2010. But two weeks ago, President Rafael Correa granted her pardon after she apologized.

“There is no doubt that if someone commits a crime during a protest, that person should be investigated,” said Jose Miguel Vivanco, director of HRW for the Americas.

“But it is unacceptable that no hearings are granted to revoke convictions for terrorism or sabotage imposed on people who criticize the government and peaceful protesters even when the Ecuadorian law has been reformed to prevent such abuse,” he said.