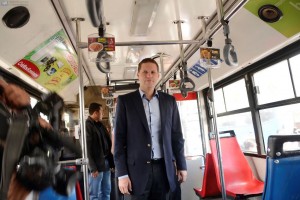 The delivery of 40 articulated buses in Quito ignited the controversy between President Rafael Correa and the capital’s Mayor Mauricio Rodas. The president wrote in his Twitter account the night of Wednesday, March 4: “Gratitude has always been a virtue of the people of Quito. Was it said that every penny of the Quito buses was donated by the Government?.”

Rodas, chose a rather diplomatic answer and said on March 5 that “any work belongs to any national or local ruler because these are financed with resources of the people of Quito.”

The fact is that the new buses, Mercedes Benz, were bought with a non-refundable credit of the Banco del Estado (State Bank).

“With these new units, we expand the system capacity and thereby passengers are being reduced from eight to six per square meter. Which means there will be more space for users,” explained Rodas about the benefits of the work.

The implemented initiative is part of the public mobility project presented by the Mayor of Quito. Within this plan there are axes involving public transport, pedestrians and the road system. Everything will have a gradual development from 2015 to 2030.