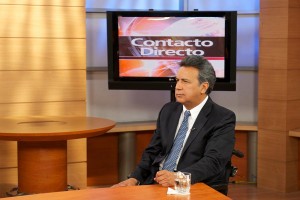 Unlike what he said on Tuesday, March 3 in an interview with Ecuavisa, the former vice president and special envoy of the United Nations (UN) for persons with disabilities Lenin Moreno, said on Thursday, March 5 in a interview with the media Radio Vision that the caricature Xavier Bonilla (Bonil) made about legislator Agustín Delgado IS “tacky” and even a “little rude.”

He also indicated: “I think in this case It never existed the intention of socially nor humanly affect Tin Delgado.”

Moreno recanted to his statements about Bonilla after, through a statement, the leadership of Alianza PAIS (AP) released its objections to this approach.

“(…) It is a caricature of bad taste. I’ve seen precious cartoons of Bonil, but this was tasteless,” he said.

Ecuador: still on the FATF list, despite promulgation of the COIP