They walk in silence. Some wear jean and sweater. Others arrive with a gray heater. It is the uniform in which they were held for weeks at the United States border . It’s Friday, March 19, 2021. 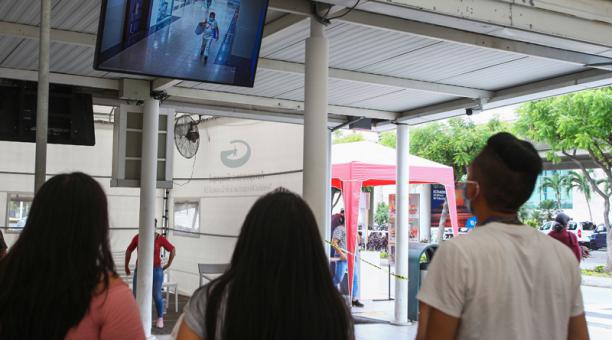 A little before 3:00 p.m., a plane with 60 Ecuadorians who were trying to enter that country without documents landed in Guayaquil . They were deported.
Few people, wearing colorful scarves and warm sweaters, wait outside the airport . Do not speak. They spend whole hours in front of six screens that show images of those who arrive.

Francisco is one of the deported youths . He goes out and looks everywhere. On his arm he holds a red sweater. He walks quickly and approaches a person who does not know him. “ Young man, can you give me a call. I don’t have a cell phone or money ”. He is desperate. The boy helps him. “My love, I have arrived at this time. I’m in the white tents in the parking lot, come on, ”he says and hangs up.

There he stays to wait. He speaks little and claims to be from Zamora , who a month ago tried to reach the United States, but was detained by the border police in Laredo, a border site near the Rio Grande .

Since then, he has been in a detention center and from there he was able to call his wife the day before to notify her that he was arriving in Guayaquil . “All of this is horrible. In that jail one cannot sleep, because all day they had us with an intense light. For lunch they give us a cold taco in the morning and another in the afternoon. I was there for 30 days, but there are people who spend months ”.

Why do they come without laces or straps? “Because the police fear that we will commit suicide. If we are more than three months old, they give us the uniform ”.

The story is interrupted by applause. Parents, uncles and nephews welcome another boy. Women kiss him and men hug him.

They all cry. They are from Ingapirca , an area of Cañar . They waited for him four hours in the airport parking lot.

“Now they want to charge us hard.” They fear that he will seek out the family for retaliation. For this reason, as soon as the deported person leaves, they get into two vans and leave.

Manuel is also waiting for his 18-year-old brother. He is from Azuay and says that his relative embarked on the trip in March 2020, when the confinement was just beginning .

For five months they had no news of the boy, who had come to Minnea-polis . A sister was waiting for him. “We thought he was dead. We did not know what to do. Here my dad suffered. We prayed every day until one day he called and said he was in a jail in Texas ”.

Manuel was a migrant. He left the country after the bank holiday. At that time he remembers that he traveled to the United States on a ship.

There he spent 15 years and that is why he did not want anyone to suffer the same. As you recall those scenes, your relative suddenly appears at the door.

He wears gray warmer and black shoes. Manuel runs towards him. Hugs him. They smile.

Oswaldo was also expelled. He says he is from Cuenca , that he could not notify anyone that he was arriving. So ask the rest if anyone goes to that city. A man agrees to take him, but after his relative leaves the airport . While you wait, place the clear mesh bag on the floor. There he has crumpled papers and two books. “All of this helped me to clear my mind in jail. In that place he could only read ”.

His story begins last February, when he went to Mexico with his sister and niece. They each paid $ 16,000 to coyoteros to help them get to New Jersey .

The unknown men gave them bracelets and keys so that they could walk through the clandestine passages. “In Sinaloa my key was Villas. If you don’t say that, you run the risk of being kidnapped or killed ”.

The story continues: “They locked us up in warehouses with 150 people from all countries. There were Hondurans, Peruvians, Cubans, Colombians. We went without food for three days. In groups of 20 or 30 they would take us out to cross the Rio Grande ”. Remember that you go hungry in the desert; others surrender. His sister was given asylum for her daughter. They expelled him.