Deposits of the Ecuadorian bank have fallen so far this year 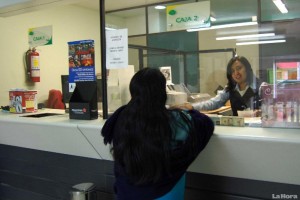 The deposits of private banks, finance and mutual companies, cooperatives, credit cards and the National Development Bank dropped by 4.7% between January and June this year.

This is shown by the account of Monetary Liabilities of other Deposits Companies of the Central Bank, which registers these operations. The account fell to USD 1 452 million, when going from USD 30 477 million in December 2014 to 29 026 million in June this year.

But this has not been the same for all sectors of the financial system. For instance, term, demand and restricted cash deposits of the large cooperatives (segment 1) rose to 9.4% between January and June last year. But those of the private banking fell every month from January to June last year, resulting in a total decline of 3.8% until June.

In the case of private banks there is a change in the trend, as deposits had been growing steadily in recent years. Analysts and financial institutions agree that it is a reflection of the lower liquidity in the economy.

This despite the fact that the Superintendency of Banks published on its website that the financial system is healthy and solid.