BREAKING NEWS
Rafael Correa may not be a national candidate
Alvaro Noboa’s son defends his father from “memes” and ridicule on the Internet
Agreement with holders will bring five benefits
Ecuador negotiates to pay debt until 2040 with lower interest
The vacancy of office spaces increases and rental prices tend to drop in Guayaquil
Galapagos: the jewel in the crown does not feed
Ecuador will present at the UN advances in Sustainable Development Goals
These are the benefits of eating bananas on an empty stomach
With only 9% occupancy, hotels already consider lost in 2020 and 2021
Filmmaker Sebastian Cordero: “The Academy has given a sign of inclusion” 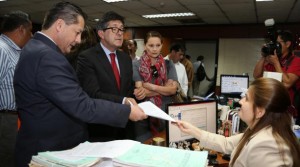 On Tuesday, the president of the Assembly, Gabriela Rivadeneira (AP), along with Pabel Munoz (of the Senplades), will submit the schedule of the dialogues the 12 legislative committees will drive.

One of the objectives is to create a bridge with the proposal made by President Rafael Correa and give more participation to citizens in the processed bills.

However, a resolution will be also discussed at the plenary to reject the demonstrations of the last month and a half by the Inheritance and Capital Gains bills.

Legislator Ramiro Aguilar (independiente) explained the reasons why the proposal of the ruling party is illegal and unethical. At the constitutional level, the resolution prohibits the opposition whose right is guaranteed in Section 111 of the Constitution.

Section 387 of the Code of Democracy that prohibits disqualification of opponents would be also violated. On the moral level he ensures that the text is a total submission to the Legislative Branch, violating the principle of independence of powers.

Diego Salgado, CREO, describes as a “political provocation” the text that will be proposed by Alianza País (AP), because it seeks that the Assembly ratifies as a function of the State the Executive branch’s speech. Salgado questioned its legality, constitutionality and warned it will not contribute to the climate of dialogue.

The resolution has terms that the ruling party and the president have reiterated. Such as demonstrations are promoted by opposition groups of “extreme right” and denounce coup attempts.