The case of Fondo Global de Construcciones (Foglocons) is already res judicata. Fictitious exports and money laundering through the Central Bank of Ecuador will not be investigated again. Their representatives can walk quietly through the streets of the country because the Ecuadorian justice left them in impunity. 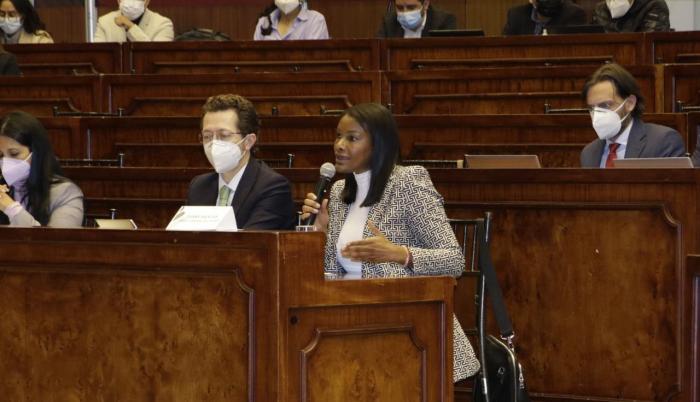 Diana Salazar pointed to judges, who ruled in favor of the company of Álex Saab’s partners.

The prosecutor Diana Salazar reached that conclusion , after a detailed account of the actions that the Prosecutor’s Office promoted to persecute Alex Saab’s partners. Álvaro Pulido Vargas and Eduardo Sánchez Yánez were investigated between 2013 and 2015, but finally they obtained favorable rulings: a nullity of everything acted by the prosecutors and a dismissal.

“This case should lead us to question how the justice system is,” Salazar said, visibly indignant, before the Supervision Commission of the National Assembly, where the use of the Sucre compensation system to launder money in the national financial system is being investigated. , funds that came from fictitious exports to Venezuela.

In his presentation, Salazar spoke of nullities, corrupt judges , tricks by lawyers and the abuse of alternative measures to prison that have allowed other accused of money laundering to be currently at large.

“The prisons are full of poor people, because those who are related to money laundering do manage to evade justice,” added Salzar.

Among the corrupt judges, he specifically named Madeline Pinargote, sentenced for prevarication, and Gabriel Manzur, former judge of the Guayas Provincial Court, currently a fugitive for illicit enrichment, who according to Salazar received money from the Global Construction Fund through the lawyer Silvana Patricia Valladares.

Although the investigation against Saab’s partners can no longer be reopened nor can it be tried again, the Prosecutor indicated that it will push for new investigations against officials of the Central Bank and other public entities that “had a duty to prevent but raided the way to allow Ecuador to become a laundry”.

He confirmed that there is a new investigation for “facts related” to Miguel Ángel Loor Centeno, president of the Professional Football League of Ecuador, who received money from Foglocons.

Prison crisis: The president presents the diagnosis in an appointment with other authorities