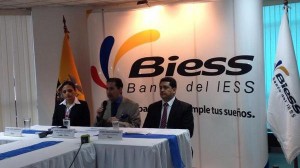 Gabriela Robalino Aguirre, former Secretary of the Ministry of Technical Coordination of Economic Policy, and Efrain Cazar Moncayo, former manager as Housing Bank shall be appointed today as leading members of the Board of the IESS Bank (Biess Board).

The National Assembly will appoint the representatives of the active members and retirees as the Biess Board, after the qualification made by the Superintendency of Banks.

Gabriela Robalino Aguirre, who served during the contest as Deputy Minister of the Coordinating Ministry for Economic Policy, will now represent the membership. Cazar, however, was Manager of BEV (Ecuadorian Housing Bank) in 2012.

During the legislative session Terry Christiansen Zevallos will also be appointed to represent active members; and Joaquin Chanabá Alfredo Vega on behalf of the retirees.

Elimination of drug chart of the CONSEP is requested