Dozens Killed by Bombings in Pakistan 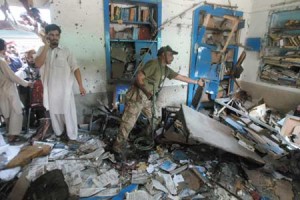 In the Pakistan restive tribal area twin bombings killed over 50 people at a government office, the attack left around 120 injured. The suicide bombers were disguised as police officers. The possible target of the blasts was a meeting at the administrative offices of Mohmand agency.

In the town of Ghalanai hundreds of civilians inside the building located on in the tribal region where Taliban and al-Qaeda militants were injured.  Among the casualties were tribal elders, security officials and two Pakistani journalists.

During the last three years the Taliban people have gained strength, the Pakistani officers insisted to the tribes that they should organize defense forces.

“The scattered acts of terrorism reflect that there is no collective stand against the terrorism at the political level,” comments of Mian Iftikhar Hussain, information minister for Khyber-Pakhtunwha province, adding that “Therefore, the terrorists are succeeding in their attempts.”