Draft Law to the Labour Code is proposed in two versions 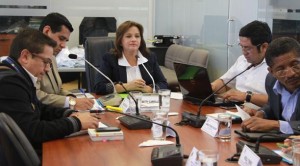 The draft Law to the Labor Code is proposed in two versions within the government. The Minister for Industrial Relations, Carlos Marx Carrasco, will deliver the project to President Rafael Correa until next week, so he can make his observations and send it to the Assembly for processing.

According to Betty Carrillo, President of the Assembly Commission on the Rights of Workers and member of the Alianza País party, she received proposals from members of the civil society, the United Workers Front (FUT for its Spanish acronym), the National Federation of Agribusiness, Farmers and Free Indigenous of Ecuador (Fenacle) and the -version 5,2B- draft that made public the Minister for Industrial Relations on May 1.

Currently, the Ministry of Labour Relations is finalizing a draft law that will be submitted to the Executive next week, which will incorporate several elements to comply the goal of being “revolutionary.”