“Drastic measures” against protests in Venezuela 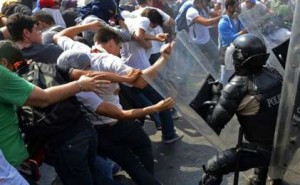 While most parties involved in the conflict invoke peace in Venezuela, the President Nicolás Maduro congratulated the `flawless´ performance of police forces and announced that his government would take `drastic measure´ to end the protests.

The more intense violence was registered in cities of the state of Carabobo, west of Caracas, such as Valencia (the State Capital) , and `La Isabelica´, where three deaths by shootings were registered.

In Caracas, a march called by opposition students demanding an end to the impunity that security members involved in acts of abuse and other violations of human rights enjoy, was severely repressed.

The university students were heading to Plaza Morelos, where they would meet Maduro and Vice President Jorge Arreaza.

In view of this action, Maduro congratulated himself, before hundreds of young offiicialists, by the `flawless´ performance of the security and public order.`If we had let pass the fascist march, we would be counting the deaths and the damage´, he said.