E! have not yet decided the future of ‘Fashion Police’ after the death of Joan Rivers 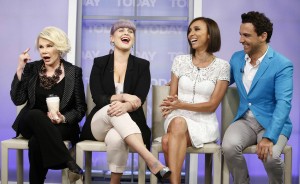 E! said they have not made a decision on the future of “Fashion Police” program after the death of Joan Rivers.

The network said in a statement it is “in mourning for our beloved Joan, and we will respond in the future with programming updates”. Rivers’ daughter, Melissa, is the executive producer of the program.

Rivers died this Thursday at age 81 at Mount Sinai Hospital in New York. She was hospitalized on August 28 after having a cardiac arrest in a physician’s office after a routine procedure.

“She has been a very loved member of the E! family for over 20 years and the world is less fun without her”, the network said. “Today, we feel despite knowing that Joan will not enter through the door”.

E! had previously said that the program, which typically has new episodes on Fridays, would have a pause for the next two weeks. Instead, the chain plans to send two special programs focused on New York Fashion Week.