That Ecuador leaves Sucre is one of the objectives of the Supervision Commission. This November 8, while more details were known about Alex Saab’s traces in the country, legislator Bruno Segovia announced that this recommendation will be made before the Plenary, after learning that the system created in 2009 by Hugo Chávez did not serve for the country get more dollars and thus improve liquidity. 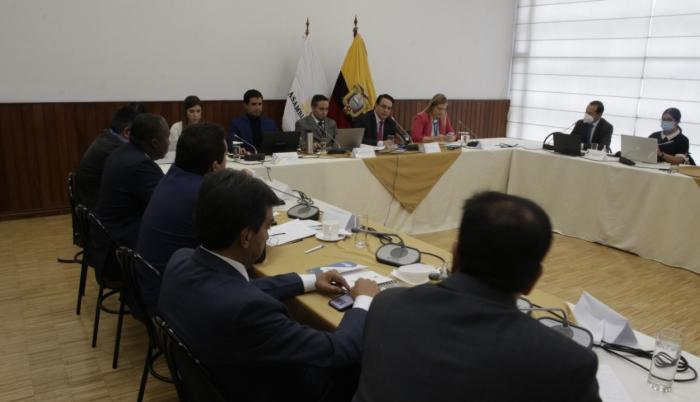 The Fiscalization legislators heard yesterday the interventions of government officials.

“It served to launder money and defraud the state,” said Segovia, from Minka-Pachakutik.

His reaction came after learning that the Saab company, Global Construction Fund (Foglocons), exported $ 296 million to Venezuela. But he did not pay a dollar to the Internal Revenue Service (SRI). The only tax that it complied with is the Outflow of Foreign Currency, for more than $ 2 million.

This was confirmed by Andrés Ordóñez, delegate of Marisol Andrade, director of SRI, in his appearance. He explained that the Saab company, supposed front man of Nicolás Maduro, registers debts to the treasury for $ 558,000, which have not been collected since 2014 . No attempt was even made to collect them in 2016 when Foglocons was returned $ 58 million, which had previously been withheld for indications of money laundering.

Ordóñez also provided information on other Ecuadorian businessmen who are related to the Foglocons company, since they appear as suppliers of materials. Among these he mentioned Víctor Silva, Jaime and Luis Sánchez, Nassib Neme and Miguel Ángel Loor. About the latter he said that he benefited from around $ 36 million from Foglocons. But that the SRI owes around $ 7 million. They were also summoned to give their version in the Assembly.

Another piece of information that generated controversy was the Sucre compensation. According to the president of the Commission, Fernando Villavicencio, the country guaranteed foreign trade transactions between private companies through international reserves of the Central Bank.

Ruth Arregui, current Superintendent of Banks, said that those payments were based on the Constitutive Treaty of Sucre that was approved in October 2009 by President Rafael Correa and received authorization from the National Assembly.

“Is it beneficial that agreements between private parties are paid with state reserves?” Asked Pedro Velasco, from the Avanza party. The legislator Segovia insisted with the same question. However, the superintendent chose not to comment.

Who explained how the compensation mechanism works was Verónica Artola, former manager of the Central Bank.

He said that the Central Bank received Sucres and issued dollars, but after six months the Bank of ALBA gave him dollars. In his opinion, this operation was too expensive and not very transparent, since since 2018 Ecuador requested data on the Venezuelan companies that imported.

She recommended that Ecuador should get out of that monetary system. “As assembly members they can do it and they have a moral responsibility, ” he said.

It turns out that Mr. Alex Saab, the resources he took out of the country are also in Panama, in Banisi.

Correísta Comps Córdova said that he will request the appearance of President Guillermo Lasso to clarify “his relationship with Álex Saab.” Ana Belén Cordero, from the ruling party, burst out laughing when she heard the statement. Cordova, annoyed, raised his voice and said that the offshore issue should also be investigated. Later, the legislator pointed out that the Sucre system served for transactions between private parties, so “the State was not affected.”