The Prosecutor’s Office confirmed that there is a previous investigation against the former presidential candidate Andrés Araúz , the Alliance 1-5 Union for Hope (UNES) and 24 other people and companies. This fact was confirmed this Tuesday, November 9, 2021. 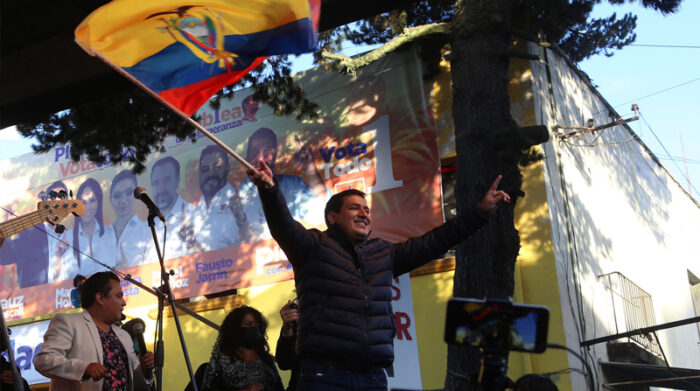 The Prosecutor’s Office confirmed that there is a prior investigation against former presidential candidate Andrés Arauz and 24 other people.

This investigation was opened on June 30, 2021, and the alleged crime of unjustified private enrichment is being traced.

According to article 297 of the Comprehensive Criminal Code, this offense is configured when a person obtains for himself or for another an unjustified increase in assets greater than 200 unified basic salaries. This crime is punishable by imprisonment for three to five years.

This inquiry was opened from a complaint filed by a citizen movement called Patria Sin Corrupción . That judicial complaint was filed on March 11, 2021.

On that date, that movement asked the Prosecutor’s Office to investigate Andrés Arauz’s campaign contracts with a Mexican consultant and a Spanish political scientist.

This is a stage prior to the criminal process. It is used for the agents to collect evidence to determine whether or not the crime has been perpetrated.

If the Prosecutor’s Office finds sufficient elements of conviction, it may file charges against the indicated persons.

As this crime is punishable by up to five years in prison, the Prosecutor’s Office has one year to collect evidence. This is established in article 585 of the criminal law.

According to the complaint filed by Carlos Andrés Aguilar, representative of Patria sin Corrupción, when Andrés Araúz was a presidential candidate, he would have signed an alleged contract of USD 20 million with a Mexican consulting firm and its subsidiary in Ecuador.

Aguilar questioned that one of the representatives of that consultancy has been in Ecuador as an electoral observer in the first round of the last presidential elections.

In addition, the complainant mentioned that the representative of that consultancy must appear before the courts of Spain within an investigation for alleged ” embezzlement in the electoral spending of a Spanish political party for more than 300,000 euros.”

The assemblyman of the Citizen Revolution, Fausto Jarrín , indicated that the members of his bench are aware of this previous open investigation and described as “absurd” the complaint that was presented by “a group allied to the ruling party during the electoral campaign.”

So far neither UNES nor Andrés Arauz have spoken about this preliminary inquiry. Only, former President Rafael Correa wrote the following on his Twitter account: “The Prosecutor’s Office is investigating… Alianza 1-5! They don’t even keep the forms anymore! ”. However, the message was deleted minutes after it was published on that social network.

Ecuador grants ‘violet’ visa to Afghan citizens. These are the requirements