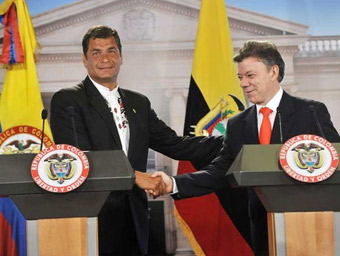 The Defense Minister of Colombia, Juan Carlos Pinzón, reported yesterday that Colombia and Ecuador agreed that they will patrol together the coastal zone of the common border to strengthen the fight against drug trafficking and illegal fishing.

The agreement was reached after a meeting that Pinzon held with Ecuador’s Security Minister, Homero Arellano, in the city of Cali, in the framework of a meeting of civilian and military authorities of the two countries.

“We have agreed that we will make binational joint patrols in the coastal zone, specially in the maritime area of our border (on the Pacific Ocean). That means that Colombian and Ecuadorian military will jointly patrol the area,”said Pinzon in a statement from his Ministry.

The meeting of the authorities of both countries ends today with a visit to the bordering Department of Putumayo (South), where irregular groups as the guerrillas of the FARC operate and there are coca crops, according to the Ministry of defense.

Last August 8, an Ecuadorian military died during a clash with members of the FARC in the border area, after this event President Rafael Correa ordered the military to repel any attack on the Colombian side.

During this confrontation also died five insurgents and another Ecuadorean soldier was wounded.