Ecuador and Peru expand their Binational Plan for a decade 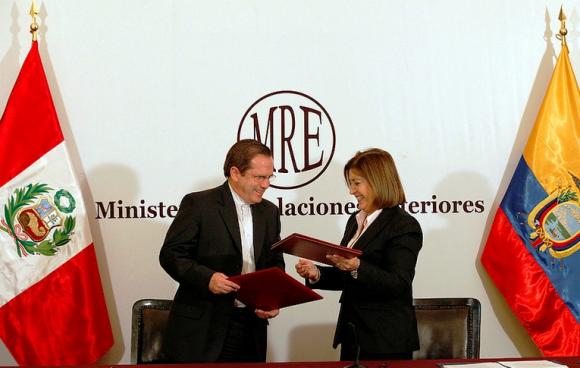 The Binational Plan between Ecuador and Peru, which is implemented in their common border, will extend for ten years. The decade agreement began since May 14, 2014, according to a statement by the Ministry of Foreign Affairss in the Official Gazette on June 19.

Thus resolved Chancellors Ricardo Patiño of Ecuador and Eda Rivas of Peru, according to the note No. 12880/GM/SALC/2014 of the Ecuadorian Ministry of Foreign Affairs.

The letter is dated May 12 and it refers the meeting that the Presidents of Ecuador Rafael Correa and Peru Ollanta Humala, had in Chiclayo in February 2012.

They “instructed to extend the term of the Binational Plan for an additional period of ten years,” the statement said.

Patiño replied on May 13, that the Ecuadorian government expressed its “conformity” with that.

The original agreement was signed in October 1998 and then extended in June 2007. Its previous period was 2009-2014, according to the diplomatic note.