Ecuador is among the last 15 countries in America in the amount of doses applied per inhabitant. The Cayman Islands , Chile , Bermuda , the US and French Guiana are in the top five with the highest vaccination rates . 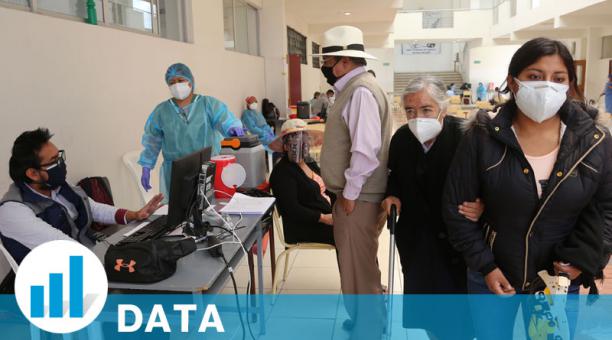 This means that in the country two doses are being administered for every 100 people. This places it in position 36 out of 49 countries in the American continent, according to the registry of the Pan American Health Organization (PAHO).

But the speed with which it is being vaccinated up to date is still low. Between January 21, when immunization began , until April 6, 76 days have elapsed, in which the daily average of doses applied (first and second) would be 4,695.

Before the start of the vaccination , the president, Lenin Moreno, said on the radio program De Frente con el Presidente, that it was expected to apply 30,000 daily vaccines against covid-19 and a few days ago it rose to
50,000.

It is evident that in Ecuador this expectation of daily vaccination is not being met, on the contrary , during this process the lack of a vaccination plan, confidentiality and controversy about who have been included in the vaccination lists have been denounced , as well as the disorder with which the formulas are applied in various parts of the country, such as in the Central Technical College of Quito .

On the other hand, since the pandemic began , the country has had five health ministers, who have been questioned about their management and the sixth has just taken office, days after Moreno’s term ends.

All these problems have resulted in Ecuador having so few vaccinated per 100 inhabitants and, despite the fact that, in mid-December 2020, the Government had already authorized the start of the US Pfizer vaccine .

This authorization was made on a par with Chile , which has a similar population. However, this neighboring country is far ahead of Ecuador , all of America and the world.

Until April 4, PAHO ranks Chile in second place on the continent with 54 doses per 100 inhabitants. First, there are the Cayman Islands with 79.

Chile began vaccinating in December and has already covered 7 million inhabitants with at least one dose and 4 million with two doses.

Between both doses, Chileans have managed to cover 26.6% of their population of 19.6 million and this makes them position themselves as one of the countries with the highest speed to vaccinate , above the United States, which is in fourth place with 155 million doses and 47 per 100 citizens.

Between both doses, Ecuador barely has 2% of 17.7 million people immunized. This percentage corresponds to first-line health personnel and the elderly.

210.3 million doses have been placed in the 49 nations of the continent, of which the highest percentage is concentrated in the US , Brazil , Chile , Mexico and Canada .