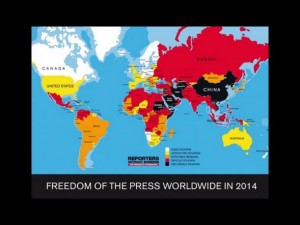 The International Organization Reporters Without Borders (RSF) released yesterday its annual report on the situation of freedom of expression in the world. In this document, Ecuador back warded 13 places, ranking 108th out of 180 countries assessed.

RSF explains that several aspects conclude that Ecuador “suffered a great fall.” Among them, it is noted that journalists and media are subjected to forced corrections. In addition, it is explained that campaigns of denigration would be carried out, “most of them through television and directly orchestrated by President Rafael Correa.”

Beyond this, the NGO states that journalists and Internet activists killed in the past year have not registered.

“Amid a climate of strong polarization and under the threat of criminal proceedings, self-censorship is a reality,” the organization explains in the chapter regarding Ecuador.

The South American country’s highest score in the barometer of RSF is Uruguay, which is in position 23. Among the worst rated in the region are: Venezuela, ranking 137; Paraguay, at 109, and Ecuador, at 108.