Concentrations of workers and of the ruling party marched independently on September 17 in Quito, Guayaquil and Cuenca. The labor unions showed the rejection to the preliminary draft Labour Code, while the sympathizers of Alianza PAIS supported the decisions of the government of President Rafael Correa.

Correa closed his ‘Festival of music and culture by the labor revolution ‘ in the Plaza Grande in Quito, a political act against trade union marches that lasted about eight hours, announcing they will dedicate in the “immediate term” to radicalize these three areas.

“We must not rest on one´s laurels. We have to work every day, understanding that everything may be lost, that conservative restoration with the complicity of bad leaders and troublemaker exists, because the immediate goal is to destabilize the revolution (…), then they are going to take off the entrails between them,” he said. 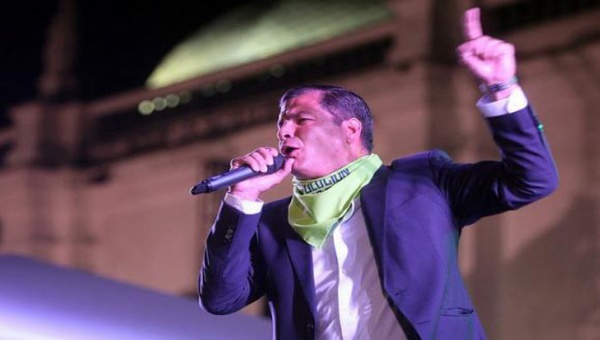 In the march organized by the United Workers Front (FUT for its Spanish acronym), which brought together students, pensioners, teachers, indigenous, chauffeurs, private employees, opposition politicians and a few bureaucrats, ended in violence, with several arrests and injuries.

During the whole trajectory of the concentration, which began in the Caja del Seguro, in northern Quito, the protesters were guarded by police, until they reach the Plaza de San Francisco at 18:00, where the leaders improvised a stage and began the speeches to protest against government’s labor policy.