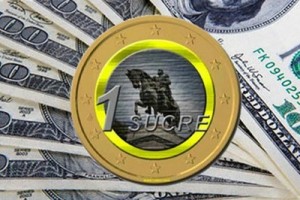 Exports from the 6 of July 2010 until 22 May of this year with the Single System of Regional Compensation (Sucre), the virtual currency for the Bolivarian Alliance for the Peoples of America (ALBA), were $2.423,3 million,in 5.421 received transfers; while imports accounted for $141,4 billion with 58 transactions. 94.59% of operations correspond to transfers received by exports.

The Sucre is a monetary mechanism serving for the channelling of international payments between its member countries: Bolivia, Cuba, Ecuador, Nicaragua and Venezuela. It is exclusively between central banks, in local settlement (payments to exporters and collections importers) is made with the respective national currencies of the Member States.
According to the ECB, the majority of transfers executed through the Sucre were made to and from Venezuela. Among the products that most have been exported to Venezuela, Cuba and Bolivia are the tuna canned, palm oil, milk, rice, radial tires, vehicles and accessories for trucks, gas cookers, refrigerators and baby diapers. What more has imported is urea, drugs and vaccines.

Inheritances proyect is today delivered to the National Assembly