During the course of this week, the Coordinator for Investment and Work (CIT), of Peru, estimated that some 15 million dollars in direct investment from at least 10 Peruvian companies will reach Ecuador. 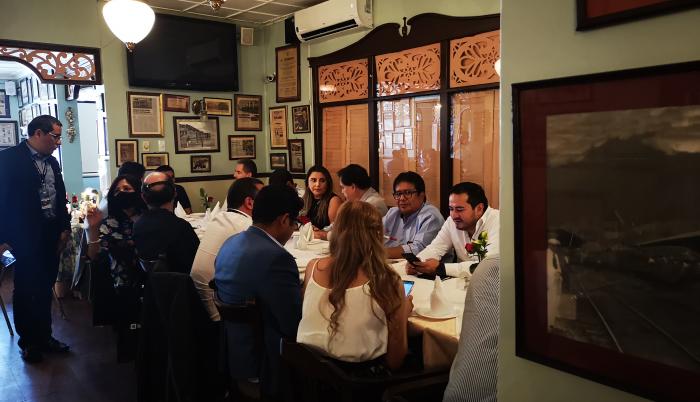 The delegation is at the Lo Nuestro restaurant in Guayaquil.

During the mission of twenty companies, which runs through Guayaquil, Quito and Portoviejo until tomorrow, expectations of direct investment and future strategic alliances were generated for some $ 1,000 million that could arrive in Ecuador due to the stability and confidence that “President Guillermo Lasso is generating”.

José Manuel Saavedra, who heads the Investment Coordinator, told Diario EXPRESO that in two months of the new Peruvian government, 23,000 million dollars have gone to the United States, Panama and Uruguay. “We have had a change of government two months ago and unfortunately the political noise that exists at the moment in Peru, I do believe that a little has limited the continuation of investments in Peru and businessmen will continue to wait, but we see it as an opportunity for expansion in Ecuador”.

The political issue in Latin America “goes like a pendulum, from one side to another” and unfortunately closed economic policies that do not allow openness to the world tend to fail, protectionisms tend to plunge the population into poverty. “I hope that Peru does not turn, although so far the changes they want with a Constituent Assembly have not taken place.”

The entrepreneurs who arrived represent various sectors, including two from the real estate area, who plan to build homes for all sectors. They are looking for offices. They are going to invest about $ 10 million in houses and buildings.

There is a white goods company that is looking to open a branch or ally with a local to manufacture kitchens and export to the Andean Community; It is a Korean brand. Next week they will make the official announcement, Saavedra said. This company had the first conversations with an important company in the city of Guayaquil.

Another group of businessmen will come on a second mission, among which they will be related to gastronomy, with Peruvian brands and who want to enter Guayaquil and Quito with restaurants and other franchises. These seek a fusion between Ecuadorian and Peruvian food.

These companies will come on October 18, 19 and 20. Quito is the main destination.

INTEREST IN EL PACIFICO.  According to the Investment Coordinator, he stated that there is a large financial group that is going to enter Ecuador, “we do not know if it will take place, but the intention persists, and it is interested in Banco del Pacífico . There are other groups interested in an alliance,” says José Manuel Saavedra.

Fuels in Ecuador: gasolines Extra and Eco-pais would maintain a subsidy until the end of 2021