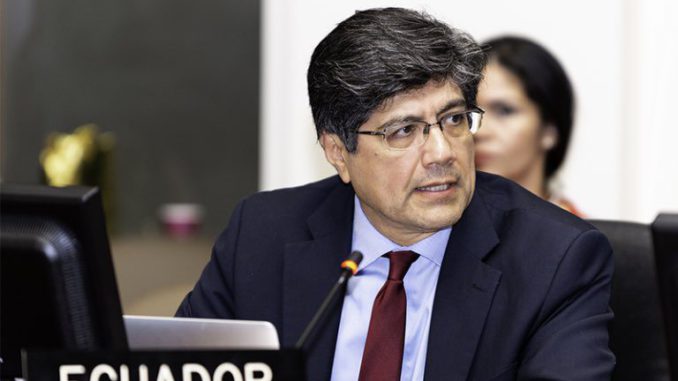 Ecuador has not yet defined a date for the return of its ambassadors to Venezuela and Bolivia, after the impasse caused by the criticism of its presidents, Nicolás Maduro and Evo Morales, to the judicial process to which ex-president Rafael Correa has been linked.

This was said in an interview with EFE the Ecuadorian Minister of Foreign Affairs, José Valencia, on the dispute with both countries, which is still open.

“Our ambassadors have not yet gone to these capitals,” he said, adding that there is no date for the displacement because his country waits to see “how events unfold.”

On July 4, the Ecuadorian government sent “formal protest notes” to La Paz and Caracas, after Morales and Maduro criticized Correa’s request for preventive detention, linked to an investigation into the attempted abduction of ex-legislator Fernando Balda in 2012 in Colombia.

Ecuador then called for consultations with its ambassador in Bolivia and suspended the transfer to Venezuela of its new diplomatic representative.

The head of Ecuadorian diplomacy recalled today that the protest was due to “pouring expressions that were totally wrong, that had no foundation.”

“In Ecuador, there is a perfect separation between the powers of the State, on the basis of democratic standards that the Government of the President Lenin Moreno respects as the most”, and that “they do not give rise to think that there is undue interference of any type in the Ecuadorian judicial function, “he said.

Consulted by Efe on whether there is a cooling in the relations with both countries, he responded: “We have simply made our position known, our discomfort with these expressions”.

57 years old, Valencia, who took office last June, has just returned from a tour from Europe, in which he has accompanied President Moreno in his last stage in Spain.

Former Ambassador to the OAS, he has replaced the head of Ecuadorian diplomacy with María Fernanda Espinosa, future president of the UN General Assembly and more akin to the Bolivarian theses, of which Moreno has distanced himself.

On the situation in Nicaragua, where the president, Daniel Ortega, said on Monday to be willing to resume the dialogue with UN mediation and the participation of the Church, Valencia was hopeful.

“Every effort that is made to reach understandings and the pacification of internal conflicts in the nations are more than welcome,” he said.

And he recalled that Quito has supported the work of the Inter-American Commission on Human Rights (IACHR) in that Central American country, as well as the Church’s support for the negotiating process.

“We hope that any type of initiative can effectively lead to a prompt solution to the problems in Nicaragua and to the end of the terrible crisis and violence that that country is experiencing,” he said.

Since April 18, anti-government protests in Nicaragua have left 448 dead and 595 missing, according to the Nicaraguan Association for Human Rights (ANPDH), while the IACHR numbers the deceased in 295.

When making a review of the Latin American news, the head of Foreign Affairs announced that Moreno will attend next August 7 to the investiture ceremony of the new president of Colombia, Ivan Duque.

“They will have a contact; they are going to meet and, at that time, they will deal with relevant issues of the bilateral agenda, “he said when asked about the visit and Duque’s recent kidnapping and murder of the El Comercio newspaper team and an Ecuadorian couple.

Valencia stressed that “this is not a work visit” and insisted on Ecuador’s commitment to facilitate the work of the special team of the IACHR that analyzes the case of journalists.

He affirmed that Ecuador finances with some $ 175,000 the operation of this equipment, which, in his opinion, is a “demonstration of the commitment of the Ecuadorian State” for the mission to “come to a happy conclusion”.

As for the couple, whose relatives have complained that the Ecuadorian authorities do not serve them, the diplomat was sure that both the Foreign Ministry and other state institutions have “the doors open.”

However, Geovanna Velasco, Katty’s sister – allegedly murdered by FARC dissidents together with Óscar Villacís – announced on Monday that she will also go to the IACHR in search of protection because they do not receive replies from her government. (I)