Ecuador was presented to the world this Thursday as a reliable destination for foreign investment, in an international forum that brings together in Quito about a thousand entrepreneurs from more than 50 countries, and more than 2,000 virtual followers, to whom it offers a wide portfolio of 30,000 million dollars. 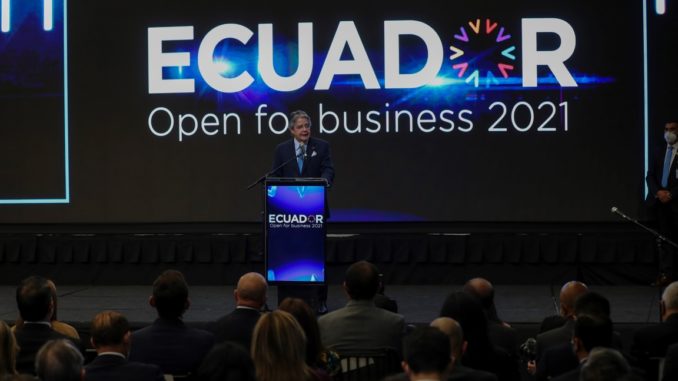 The President of Ecuador, Guillermo Lasso, inaugurates the forum “Ecuador Open for Business 2021” today in Quito (Ecuador). Lasso encouraged investors to bet on a country that has low inflation, growing reserves and consolidated dollarization, and is therefore “the country of opportunities” in the Latin American region.

The Ecuadorian president, Guillermo Lasso, inaugurated this first great economic showcase of his management called “Ecuador Open for Business 2021”, and he did so by encouraging investors to bet on “the country of opportunities in Latin America.”

He stressed that it is “a dollarized country, with low inflation, with growing monetary reserves and a government that understands that to achieve the goal of creating two million jobs it needs the private sector, national and international,” said the president when he inaugurated this two-day forum.

As guarantees of his management and growing financial stability, Lasso explained that, after his inauguration in May, the country risk was considerably reduced, that his successful vaccination plan has led to 65% of Ecuadorians immunized against COVID-19, and that Ecuador has a solid financial system and consolidated dollarization.

“The liquidity of the banking and financial system is so wide that (international companies) can count on a solvent and liquid system for investments,” he said about the 36,000 million dollars in deposits, which represent around 36% of GDP.

He also alluded to international reserves, which went from 5,900 million dollars at the beginning of his Administration to today exceed 8,200 million.

Another of the hard data that the Government wants to present as a lure for investments is that of inflation, which in October of this year stood at 1.47% per year, the second lowest indicator in the Andean region and at the top of the list. dollarized economies.

And despite the fact that Ecuador suffered an economic loss of 13% at the beginning of the pandemic (from February to April 2020), explained the Minister of Production and Foreign Trade, Julio Prado, it is currently recovering at a growth rate of 8 , 4%, according to data from the last quarter.

Prado acknowledged that despite optimistic macroeconomic data, ECLAC continues to place Ecuador among the first countries in the region in terms of extreme poverty and poverty, for which he defended that economic growth should translate into seeing how the inequality gap is reduced Social.

The forum’s agenda includes different panels, including one on social inclusion.

“The generation of employment today is the most important thing we have in the country, and we can carry it out with these foreign investments,” said Isabel Noboa, one of the country’s main industrialists, within the framework of the event.

For his part, the Ecuadorian businessman Roque Sevilla valued the importance of this type of event for the country, “which has not been held in the last ten years”, as a showcase in which to show “the unbeatable comparative advantages so that we are truly in the world”.

Ecuador will grow more than 3%, according to projections

Lasso announced that this year the Ecuadorian economy “will experience growth of more than 3.2 and 3.3%,” according to government projections.

And with this context, he reiterated that his investment goal is to reach 30,000 million dollars in his four years in office, with a broad portfolio in multiple sectors.

One of them is the succulent sample of investment in the field of telecommunications, which in Ecuador amounts to 1,100 million dollars, and the Government expects it to increase in the next decade to no less than 5,000 or 6,000 million dollars.

“We have a very clearly defined Ecuador Digital 2025 plan to which we are walking at an accelerated pace with specific processes and results, “ said the Minister of Telecommunications and the Information Society, Vianna Maino.

In the recent official visit of the Ecuadorian Executive to Spain, it was possible to observe the interest of several Spanish companies, among them in the field of renewable energy and telecommunications.

The firms Cobra Zero-E and Solar Pack will invest in the sector, while Hispasat analyzes opportunities, according to the Minister of Production.

In an interview with Efe, Prado assured that this year Ecuador will close with investments of about 2,000 million dollars, double that in 2019 and four times more than in 2020, and that the 30,000 million are constituted in a range of projects for the next three and a half years. EFE (I)