Ecuador needs USD 5,000 million for the fight against drugs

The Strategy for Security and Peace proposed by Ecuador includes a new intelligence apparatus. However, the resources are still lacking. 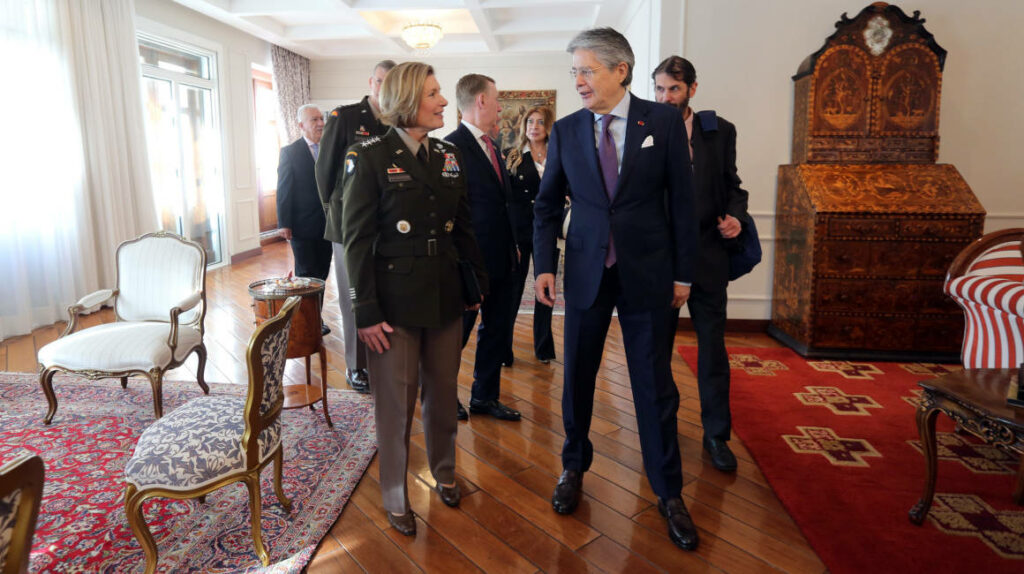 President Guillermo Lasso and General Laura Richardson talk in one of the halls of the Carondelet Palace, on September 13, 2022.

It is about what, in the first instance, President Guillermo Lasso cataloged as the Ecuador Plan. A strategy that seeks to deal with drug trafficking, which keeps the country in the worst security crisis in history.

The name was born from the similarity with the initiative that operated in the 90s in Colombia. That was a bilateral agreement signed by Colombia and the United States in 1999, and one of the objectives was to create an anti-narcotics strategy.

However, now the authorities ask not to call it that anymore. Its name is Strategy for Security and Peace.

The document was created by the authorities of the Ministries of the Interior and Defense, as well as by the Police and the Armed Forces (FF.AA.) And they presented it to Laura J. Richardson, Commander General of the United States Army Southern Command, in mid-September, during his visit to Quito.

Lasso showed the cover of the document during a television interview. But he said its content was secret. PRIMICIAS was able to learn various details of this initiative, which would cost USD 5,000 million in its first three years, and which is still looking for financing.

The Government’s intention is that part of that money be put up by the United States, since it is the main market for the consumption of the drug that comes out of South America.

For this reason, on September 13, 2022, the Strategy was presented to Richardson, who would not have asked for any changes and promised to ” push ” this policy so that the financial support materializes.

Now, Ecuador undertakes a kind of lobby on two fronts to achieve it. On the one hand, Ambassador Ivonne Baki works with the Senate and the White House. While Luis Lara, Minister of Defense, maintains communication with the Secretary of Defense of the United States.

For the construction of the Strategy, in the first place, the Government prepared a diagnosis of what is happening in Ecuador in terms of security. The first major conclusion was that the main threat to the State is drug trafficking.

For this reason, the State and Public Security Council (Cosepe) declared drug trafficking a threat and Lasso created the Security Secretariat, which is in charge of articulating the Strategy as an axis between the Police and the Armed Forces.

One of the main causes of this crisis, according to the official diagnosis, is the institutional and regulatory weakening that the country has experienced in recent years. They point to at least four causes:

Another important factor, according to a senior Lasso government source, is “the chaos, complicity and abandonment ” of previous governments regarding drug trafficking. What has caused a state weakness to combat crime.

Through the application of an international model, it was determined that the level of crime in Ecuador reaches 6.5/10. While the State ‘s response reaches 5.7/10. That is why it is currently difficult to contain the violence generated by crime.

However, the authorities assure that the violence that is reflected in the violent deaths, and that 50% occur due to causes linked to drug trafficking, are located on the northern border, the south of Guayaquil and the north of Manabí .

According to the Strategy, the first action to be taken would be to “close the borders”. In the sense that there is more control over the entry of cocaine. The government believes that if there are fewer drugs circulating in the country, crime and violence levels will drop immediately.

For this it is necessary to control the five groups, dissidents of the FARC, which operate on the northern border and are in charge of bringing drugs into the country.

The plan for the border is reserved, since it is a national security task. However, PRIMICIAS learned that to achieve this, it has the support of the Israeli government, which will act as an intermediary with the most important companies in the security industry in the purchase of border control technology.

Even in this area, the Strategy includes the Ecuadorian need to acquire supersonic planes to react to illegal groups.

As well as the approval of Intelligence and demolition and interdiction laws in the National Assembly.