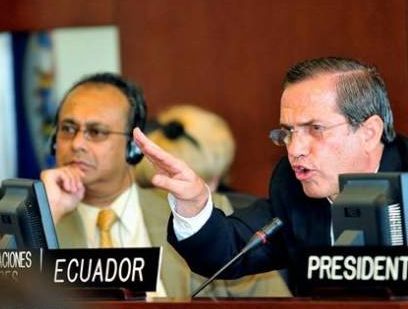 “The Secretary General of the OAS, José Miguel Insulza, has made a huge imprudence in rejecting the transfer of the headquarters of the Inter-American Commission on Human Rights (IACHR) out of Washington,” said Ricardo Patino, Ecuador’s Foreign Minister.

These statements were provided by the official regarding the position of Ecuador, which promotes the Washington´s output from the Commission, an autonomous body that promotes human rights in the Americas.

“In good time that Mr. Insulza goes home,” said Patiño in an interview with Efe, who is participating in the 44th General Assembly of the Organization of American States (OAS), which ends today in Asuncion. Insulza will leave office in May 2015.

“For now there are no conditions to resolve that, so we have said let’s possibly leave it for the next General Assembly in 2015,” admitted Patiño.