Ecuador seeks the extension of tariff benefits with the EU 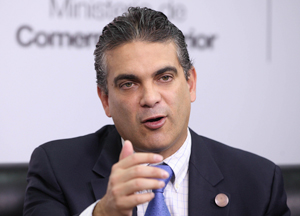 The Minister of Foreign Trade, Francisco Rivadeneira, encourages in the European Union the regulation that would extend tariff benefits to Ecuador for two more years.

On December 31, 2014 expires the General System of Preferences Plus (GSP +), which the European bloc extends to Ecuador, a mechanism that allows domestic products to enter the market with zero tariffs.

For the approval of a proposed regulation that allows Ecuador to continue enjoying the benefits that are currently granted, it is only needed the vote of the plenary. In order to promote this proposal of the European Commission to its Parliament, Minister Rivadeneira, along with the chief negotiator, Roberto Betancourt, traveled to Brussels on Monday, December 1. In addition, several meetings were conducted today.

Peter Schawaiger, EU delegate in Ecuador, said: “The adoption of the regulation is on track. The working group of the Council of Ministers met last week. The Trade Commission of the European Parliament met this week discuss and vote details. But the process is not over yet, we need a vote in the plenary of the European Parliament. Legislators are aware of the urgency. On the other hand, we are finalizing the legal verification of the agreement, so the agreement could be signed very soon. After that, we will go into the translation and ratification process.”

Ecuador will access to the tariff preferences in the European Union