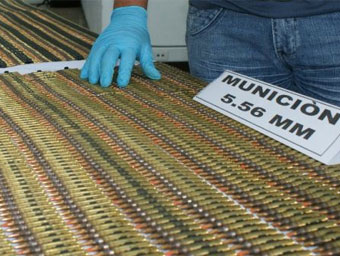 Military spokesmen said yesterday that the Armed Forces of Ecuador seized about nine thousand 5.56mm ammunition coming from Peru that seemed to be destined to Colombian guerrillas.

Part of the ammunition was found last Tuesday in an operation in Huaquillas, located at the southwest of the border with Peru. The bullets were inside drums, said spokesmen.

“They try to camouflage ammunition. What we supposedly seized was in two fuel drums filled with 5.56 ammunition,” said Marcelo Montalvo, a soldier of the Army.

A military officer stated that “the ammunition from Peru is entering to Ecuador through our international channel, and it could possibly be destined for Colombian illegal groups.”

According to the Joint Command of the Armed Forces two people were captured during the military operation.