President Correa conditions its membership in the IACHR 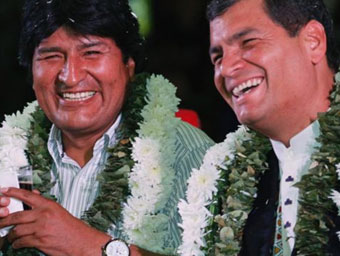 Ecuador’s president in Bolivia confirmed yesterday that if the assembly of the OAS in 2014 makes no changes in the Inter-American Human Rights System, he discussed the eventual withdrawal of his country of such entity.

“If there is no change, then (will) seriously think about our continuity in the Inter-American System of Human Rights, which has such obvious contradictions,” elaborated on the leader of the regime to the media with his Bolivian counterpart Evo Morales.

Correa maintained that the issue was discussed yesterday with Morales during their meeting in the city of Cochabamba, central Bolivia. The president of Venezuela was also scheduled to attend the meeting, however he had to cancel it in the last minute due to a flu that assails him.

According to Correa’s point of view, the Inter-American Human Rights is a clear example of the international institutions of the “new imperialism” and have “equal brutality” but “with a better decoration.”

Once again Correa insisted that the headquarters of the Inter-American Commission on Human Rights (IACHR) can not be in Washington and can not be financed by the United States, since it is a country that is not subscribed to the Pact of San Jose.