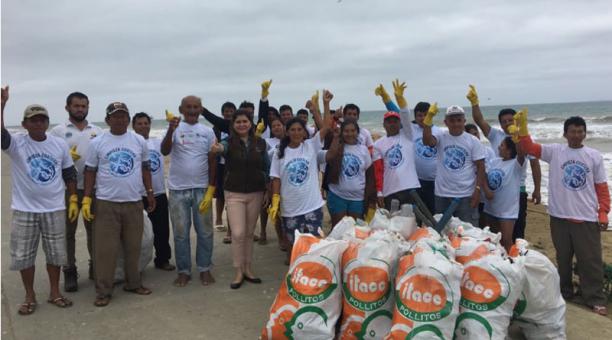 The Ecuadorian Government, which commemorated on June 5, 2018 the Environment Day with a clean-up of 6.2 kilometers of its beaches, insisted its compatriots reduce the use of plastics as an effective measure to combat pollution.

“You can fight against pollution for plastic, rejecting straws, cleaning beaches and reconsidering shopping habits in supermarkets,” the Ministry of Environment reported in its Twitter account, which evaluated positively the day of cleaning coastal areas.

With the support of students, institutional staff and citizens, the Undersecretary of Marine and Coastal Management of the Ministry of the Environment organized the cleanup at Loguiqui, Santa Rosa, San Lorenzo and Las Piñas beaches in Manta, Manabí.

According to data from the Environment portfolio, up to five billion plastic bags are used every year in the world and 10% of all the waste generated by humans is plastic.

Thirteen million tons of plastic are dumped in the ocean each year, and in turn “100 000 marine animals die because of plastic,” the Ministry added in the social network.

The cleaning of the beaches is part of a campaign promoted by the Ministry of the Environment, which declared June as the environment month in the country.

On June 1, the Minister of the Environment, Tarsicio Granizo, presented an agenda with 144 activities in different parts of the country, throughout June, as part of a campaign to celebrate the International Day of the Environment.

The country’s environmental agenda, according to the Ministry, is aimed at preserving biodiversity and ecosystem services through the creation of commitments with citizens that encourage such practice. (I)

Imbabura is the most visited in Zone 1 by foreigners

Ecuador proposes popular consultation in Venezuela before the OAS