Government expects to keep Germany’s support for the environmental initiative Yasuní-ITT. Yesterday an explaining statement was delivered in order to dismiss Berlin’s fears towards a project, crucial for Ecuador, which implies stopping petroleum exploitation in a part of Amazonia.

“We hope to reincorporate Germany as a major partner of this utopia, which is not just another environmental project for Ecuador, it’s an imprint of a new sustainable economy model,” said the Heritage coordinator and Minister, María Fernanda Espinosa, in a meeting with representatives of that government.

The Minister delivered a nine-page letter, in an approach to regain the Germany’s support, after mid-September, when the Minister for Cooperation and Development Aid, Dirk Niebel, threatened to stop country’s contribution to the project.

During a meeting with media and members of the German Parliament, Espinosa, responds in a statement to Niebel’s concernation regarding the perpetuate stopping of exploitation. 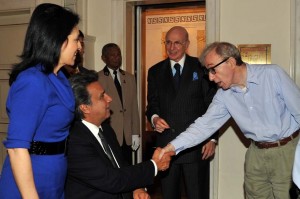 Yasuni-ITT initiative consists of maintaining 846 million barrels of oil indefinitely under some fields of the Yasuni National Park in the Ecuadorian Amazon, in exchange for the international community contribution, which is about half of the costs Ecuador would receive due to those resources.

Ecuador and the United Nations Program for Development (UNDP) signed in August the Yasuni-ITT Trust fund in order to raise the necessary funds for the project ($ 3,600 million in the next 13 years).

Ecuador had Germany as a major contributor to the initiative; all the parties in Parliament (Bundestag) gave their support in 2008, which was followed by the Ministry of Cooperation and Development Aid support.

According to Espinosa, additional explanations include the commitment that non-exploiting will be a perpetuate measure, through the so-called contingent debt, which would restore 100% of the contribution, if those resources were to be exploited.

Meanwhile, Vice President Lenin Moreno met with Woody Allen and philanthropist James Wolfensohn during his visit to New York; he proposed them to become goodwill ambassadors of the ITT Yasuni initiative.

Moreno handed Woody Allen the information of the Ecuadorian proposal to preserve the park.

U.S. Chamber of Commerce calls on Senate to discuss extension of ATPDEA Ecuador