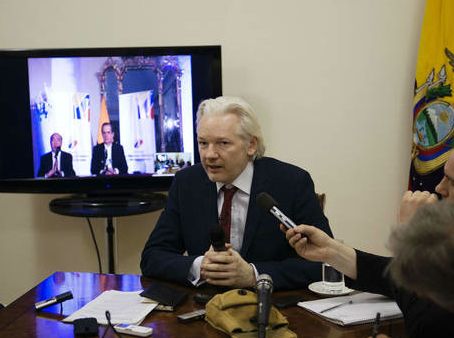 The Ecuadorian government today reiterated its support for Julian Assange, refugee for two years at its embassy in London, while the founder of the WikiLeaks website assured that, despite the difficult circumstances, he will not give up.

“We kept our decision to protect Julian Assange, to grant asylum to him based on all the rules,” said Ecuadorian Foreign Minister Ricardo Patiño, who  maintained a video-conference with Assange from Quito.

Meanwhile, Assange expressed he will not abandon the diplomatic mission and that “in this case would be foolish to leave my asylum status and in some ways the circumstances here are different from being in a real prison,” he said.

He also reiterated that he is willing to go to Sweden “under appropriate conditions”, when that country guarantees him they will not deliver him to United States.

In the meantime, his advisers note him “there is still risk” that if he does he will end up in Washington.