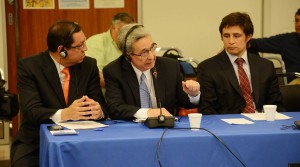 Human rights organizations, indigenous, lawyers and academics came on Sunday, before the Inter-American Commission on Human Rights (IACHR) to raise their concerns about the situation of indigenous people and the judicial independence in the country. These issues were discussed at two hearings of one hour.

The Ecuadorian government was not represented at those hearings. This would be the third consecutive period of sessions in which Ecuador seat left an empty state.

The first session referred to the Indigenous. Veronica Yuquilema, Inredh spokeswoman, said that the state has excluded all kinds of resources to the indigenous justice system and has chosen to delegitimize it; she even said that President Rafael Correa said: these “practices are barbaric and intolerable.”

The second hearing dealt with the alleged lack of independence of the judiciary. The head of the Justice and Human Rights Observatory of Ecuador, Enrique Herrería, has denounced the politicization of justice arising from the selection of judges sympathetic to the government, which according to the petitioners, started with the formation of the Council of the Judiciary (CJ) in 2011.

In the audience, the IACHR was asked to visit to the country to verify the raised claims.

Meanwhile, Correa criticized the Commission through his Twitter account. “We have more complaints from the IACHR than the (the former Chilean dictator Augusto) Pinochet. Let the world know: that Ecuador is one of the 7 out of 34 American countries that have ratified ALL the InterAmerican instruments of human rights,” the President said.

Constitutional Court waits for the amendments text to debate