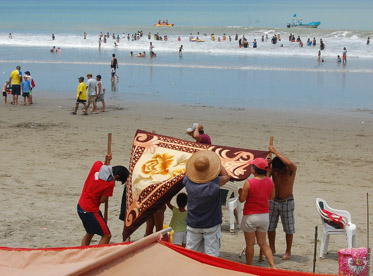 After 30 hours of shock, fear, and evacuation, the emergency that the country experienced with the arrival of the tsunami originated in Japan ended, with relief for the majority.

The balance of the event was 242,678 evacuees who returned home between the morning and noon yesterday, 200 to 550 fishing boats affected by the waves, damage in Puerto Ayora and Puerto Baquerizo Moreno, in Galapagos eight flights suspended; about 820 thousand barrels of oil were not exported, an undetermined number of losses for the tourism sector.

The largest effects were felt in the artisanal fisheries sector, especially in Santa Elena, Esmeraldas, and Galápagos, as the current onslaught on the rocks the boats that had been left in not safe areas or were not taken to the mainland.

The wave that came from Japan went through an average of 760 km per hour. Its strength, however, was reduced and therefore it caused no major mishaps. There were damaged in the police station, in Banco del Pacífico and a dozen shops in Galapagos, Puerto Ayora and Santa Cruz Island. But above all, there were affected species nesting areas, sites of scientific interest, and tourism.

Yesterday morning, some of the inhabitants of Santa Cruz and municipal employees and other public entities worked on a minga to clean the dock, the pier, and the parallel Avenue. Yesterday tourist activities resumed.

The strong waves that struck at 23:00 on Friday the coast of Península de Santa Elena broke down 300 fishing boats in the port of Santa Rosa, Salinas.

The waves flooded the main street and made the boats anchored at the site crashed against the rocks and the retaining wall.

But today, the massive influx of tourists at the box office of bus cooperatives that go to different resorts in the country marked the revival of the beach season.

Murciélago beach began yesterday to receive swimmers before 10:00. At that time everything was quiet because the waves that came last Friday night did not cause damage. The sea looked calm and the sand clean. Hence, this beach soon received other family groups with the passing of the hours.

Swimmers were present yesterday at the beaches of Bahia de Caráquez, San Vicente, Canoa, El Matal and other resorts in Manabi. Although there was nervousness in the early hours of the morning, this is dissipated throughout the day as it was lifted the state of emergency that was in force in the country.

Traders expected to attend at least half of the 8,000 tourists who where supposed to arrive this weekend. Several reservations were canceled at some hotels. Today at noon, swimmers began to arrive and everything was expected to normalize.

Galapagos was Affected by Remnants of Tsunami