Although the political asylum for former president Rafael Correa, granted by Belgium, is not officially confirmed by the Ecuadorian State, the credibility of the diplomatic area is questioned. 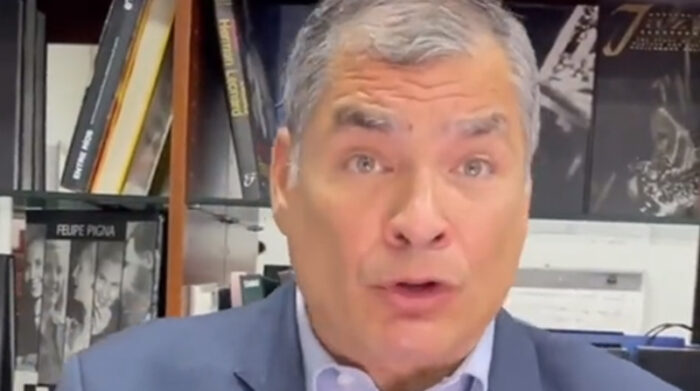 Analysts warn that if former President Rafael Correa has official political asylum, he should not engage in political activism on his social networks. In addition, they suggest actions by the Foreign Ministry.

Both former foreign minister Marcelo Fernández de Córdova and internationalist lawyer Esteban Santos agree that the reaction of the Ecuadorian Foreign Ministry is not the most timely in the face of Correa’s political asylum, announced by his Belgian lawyer.

The Foreign Ministry “has not known from an official source” the asylum, the institution reported yesterday afternoon. And until this Saturday, April 23, 2022, there was no confirmation.

The Foreign Ministry justified that they do not expect changes in the situation due to the time difference with Belgium and because it is the weekend.

One of the Ecuadorian lawyers of the former president said that he does not have the resolution of the General Commissioner for Refugees and Stateless Persons (CGRS) of Belgium. Document establishing the granting of political asylum.

For the former foreign minister and the lawyer, it is important that the Foreign Ministry request and that the content of said resolution be known. With this, it would be possible to really know if the asylum was granted because of his status as the husband of a Belgian citizen and he has that nationality or if it was due to political persecution, as the Correismo says.

“If Belgium believes that he is politically persecuted, it is a very sensitive and very serious issue. It is a failure for the rule of law and the institutionality of this Government, ”said Santos.

“If the government wants to have some credibility, it has to get its entire Cabinet to act. Not only to know how to communicate well, but to deliver these results that are currently lacking”, he added.

Former Foreign Minister Fernández de Córdova indicated that there is no regulation for Belgium to report when it grants asylum, but “normally” it should have been communicated to Ecuador logically.

However, while official information is obtained, the Government must make use of diplomatic mechanisms “to express its disagreement.”

For example, issuing “a note of protest”.

The Foreign Ministry, in the face of this, cannot remain silent, adds Fernández de Córdova. “First of all, find out if there is the Belgian resolution, under what conditions and for what arguments is it granted (asylum). We don’t have to base ourselves on what Correa’s lawyer says.”

Santos believed that Belgium should have notified Ecuador if it really granted political asylum, although it is not obliged to explain its decision.

“If Correa formally has asylum, the process (of extradition) remains in limbo, it will no longer be finalized,” he said, assuming that it would be “nonsense” for Belgium to reverse the asylum if it had just been granted.

Santos pointed out that political asylum implies that the person who receives the benefit cannot engage in political activity. Correa’s political asylum was announced on April 22, so he would have received this benefit days before.

But until today, the former president reacts with messages on Twitter about the political and judicial activities of Ecuador.

According to Santos, Correa’s communications are part of his political activity. “That is something that is expressly prohibited according to an international convention on the right to asylum.” However, it will be Belgium that decides on that non- compliance.

The former foreign minister said that the asylum seeker must respect the host country so as not to create difficulties with ” political activity directed at Ecuador.” He also agrees that Correa’s messages are part of his political actions, since social networks help to make ” political proselytism.”

Both experts compared this fact with the case of the Australian hacker Julian Assange. Who received asylum, precisely during the Government of Correa, and made statements of a political nature.

Fernández de Córdova suggests to the authorities that, when sending the extradition request through the Foreign Ministry, they attach “the entire process and the greatest number of tests” to substantiate that it is not a question of political persecution but of an enforceable sentence. He makes his recommendation by pointing out that Ecuador has little experience in requesting extraditions and in the face of failed alerts to Interpol.

FARC dissidents would store weapons on the Ecuadorian border