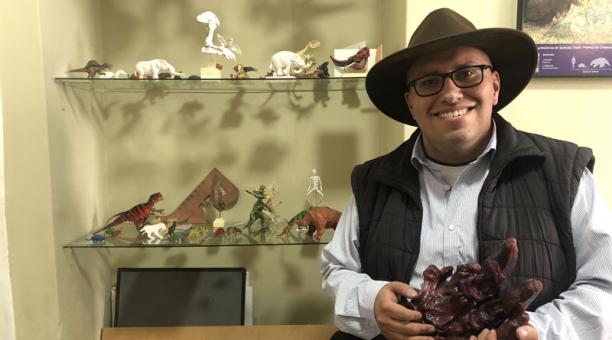 Unlike his companions who aroused affinity with other activities such as sports, his desire to learn more about prehistory has accompanied him throughout his life. Now, with 40 years, he is the first Ecuadorian with an international recognition granted by the Argentine Paleontological Association for his work as a paleoartist.

His award-winning work shows a scene that, for many, can be difficult to imagine. It happened in the streets of the Historic Center of Quito, in what is now La Ronda, about 40,000 years ago. The test is fossils found in 2009, when the land was prepared for a construction.

There were found horses, jaguars “and three large skulls of three adults and a small one,” says Lara.

These last structures belonged to some milodontes, distant relatives of the current lazy and protagonists of the illustration that at the end of November 2019 received recognition at a paleoart exhibition, organized by the Argentine Paleontological Association.

Lara won the prize in the professional category.

A paleoartist is a person who illustrates animals that became extinct thousands of years ago. With their work, which has a scientific basis, you can create imaginary of what was the lost world.

The illustration of the fossils found in La Ronda is its interpretation of the events that may have taken place in Quito in the Ice Age.

He believes that the milodontes “were very distracted by the tension that meant that the animal was hunting its young and did not feel or did not see all the landslide that fell on them and kept the bones.”

After 10 years of cleaning, collection and identification, the bones became investigations. The Ecuadorian artist, with the paleontological base, performed the interpretation of how the events happened.

“I feel very happy that the work we have been doing is putting these issues in common, in public opinion, again,” he says. Lara, who works at the National Polytechnic School as an associate researcher, also illustrated the first dinosaur in Ecuador, the Yamanasaurus lojaensis, related to titanosaurs.

He explains that to elaborate the works “he always starts from a real correlate, which is what was found on Earth”, but clarifies that his work could not be done without paleontologists, who “make sense” of the fossils that are discovered .

According to Lara, fossils are usually something abstract for the majority of the population. And sometimes we talk about animals that measure six meters, “but in reality what was found were five pieces of bone that would fit in the hand.”

“It’s about giving it a sense, that it seems that it is alive or that it generates the curiosity of who is seeing it. If I present a drawing and it doesn’t attract attention, it doesn’t connect, it doesn’t make sense to the public, it doesn’t help much, ”he explains.

Lara is said lucky. In 2017 he could see the original photos of the remains of the first Ecuadorian dinosaur. “We saw the bone and there was a small winged five cent coin, so we said this is a small bone.”

All this serves to give scientists and artists an idea of ​​the size of the animal when it lived. Choosing colors for the works is another challenge that, although based on field findings, is also based on the artist’s interpretation.

There are those who think that dinosaurs resembled elephants in their colors and that is why they paint prehistoric animals in gray tones, while there are others who believe they could be closer to the birds and give them more color.

“There is the trick of knowing how to mediate between what is known at the time as evidence and the creative freedoms that a person can have.”

And contrary to what you can think of when looking at his work, the Ecuadorian paleoartist is clear about the scope of his work. “I am nobody to have a superhuman power to resurrect and bring the past.

This, to some extent, is unrecoverable, ”he says. In his words, his mission is to make interpretations or representations of what walked the Earth thousands of years ago and that still today, amazes.