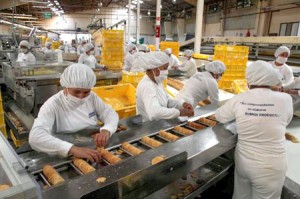 Ecuador importations have reduced by a 2% during the first quarter of 2014 compared to the same period of 2013. This is the result of restrictions imposed by the government since late last year.

In dollars, this represented $ 140 million, an amount that could have been higher if it were not that the government imported $ 146 million more in fuel between January and March.

In 2013, the Regime applied restrictions on imports of 293 tariff items, from food to ceramics, baby milk, appliances, cosmetics, packaging, etc.

The most affected sector by this measure was the industrial, which had complications to import raw materials. This created problems of production and the shortage of several products in shops, pharmacies and supermarkets.

As a result of this, the government relaxed its policy a few months ago. This removed restrictions on the import of raw materials and finished goods.

Despite this decision, companies have had to commit to buy more domestic inputs so their imports continue flowing.