The sweat was intense. Carlos was breathing heavily. He was handcuffed and his head was lowered on the hood of a green pickup. Two United States Border Patrol agents searched them while asking if he had weapons or drugs. They screamed. He understood everything, because they spoke in Spanish. 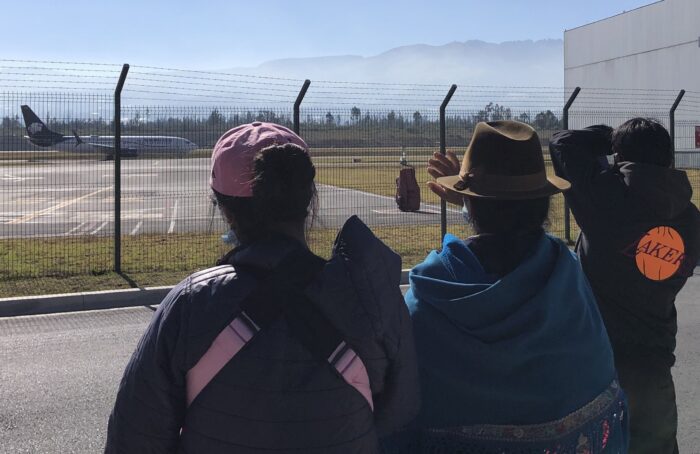 He was arrested three months ago in Texas , USA, when he crossed the border from Mexico . His story was told to staff of the Ecuadorian Foreign Ministry, when he was deported 35 days ago. There he said he had walked 12 hours through the desert and that he was with 10 other migrants.

He assured that they were happy when the coyotero told them that they were already on American soil. But in a matter of minutes everything was confusion.

They heard sirens and voices over loudspeakers ordering them to stop. They were agents of the Immigration and Customs Enforcement Service (ICE). They were caught.

The Foreign Ministry also contains the testimony of a 20-year-old woman. She was captured eight months ago in El Paso .

He spent 60 days in a detention center, while the agents verified his identity. The coyoteros had taken his passport from him during the journey “to prevent him from fleeing.” Once detained, she had to contact her family in Ecuador, to ask them to send her a photo of her identity card.

“In the prisons on the US border there are more Ecuadorians,” say human rights organizations.

Every Friday a plane with capacity for 137 people arrives from the United States. Top full to Guayaquil.

They are all migrants who spent time in detention centers . Some are silent and head straight for the exit. Others tell how they spent their detention.

For example, Carlos said that after being detained he was taken to a bus with other travelers. They were later transferred to a center on the outskirts of Laredo. There they were evaluated by a doctor and a covid-19 test was applied. Then they spent 10 days in isolation .

During his stay he received three meals a day. “They used to give us tacos, fries. All the food was cold, ”he said.

The migrants are a uniform gray. The guards in the center force them to remove cords and straps. These details were recounted by two brothers, ages 18 and 25, who were deported two weeks ago. They pointed out that there is little space in the prison. In rooms with four beds, up to eight people were held.

“The jail is cold,” said the two men who live in Azogues and assured that they did give them the opportunity to work in the same center. Cristhopher grew vegetables. His older brother helped in the kitchen. For one day of work they received USD 2 each.

For women , the treatment is similar. They are carried to a female wing. Cristina stopped by while waiting for the immigration authorities to confirm her identity. He remembered that when he entered they put ink on his fingertips and made him press, one by one, on a piece of paper. Then they asked him for all his data.

He told the authorities that the coyoteros withheld his passport to prevent his escape during the journey.

He used that document to leave from Quito to Mexico via air. Then she was taken by car to Nuevo León, to continue the journey on foot.

Two men led a group of 16 people, including six women. At dawn they had passed the Rio Grande. On the shore they saw a drone flying overhead.

Seconds later they were arrested. By not carrying documents, the agents asked the woman to communicate with her relatives in Ecuador and she is speaking on a cell phone. Thus, he was able to obtain a photograph of his identity card, sent by WhatsApp, so that in the United States his personal data could be verified. Then she was deported.

This woman told the agents in Ecuador that she will try to cross again. It will do so despite the fact that Mexico imposed a temporary visa on Ecuadorians, which will take effect on September 4. In addition, since last August 15, every Ecuadorian must present a purchased return ticket , proof of payment for accommodation and have sufficient financial resources, etc.

From January to July of this year, 62,989 Ecuadorians who were trying to reach the United States have been detained, expelled or prevented from entering.

The data correspond to the Customs and Border Protection Office of that country. The figures show growth since March of this year. 45,028 apprehended are adults (men and women) who traveled alone. They are followed by detained family groups. Until July of this year there are 23,970.

Foreign Ministry sources indicated that, on average, Ecuadorians spend two to three weeks in prisons before their deportation .

But there are also cases that have been resolved in two months.

The minors are taken to reception centers. Some are claimed by relatives who already live on American soil and are allowed access.

While his older brothers are taken to detention areas for irregular migrants and start their deportation process.

In the United States there are at least 212 centers. This year two were closed.

The Department of Safety issued a report ordering ICE to terminate the contract with two sites, in the states of Georgia and Massachusetts , while investigations into alleged abuse were underway.

The Government of that country also signed a contract for USD 86.9 million to accommodate migrants awaiting deportation in hotels.

In Ecuador, negotiation of the renewal of contracts with Movistar and Claro begins; process would take two years