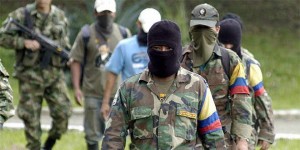 Yesterday at El Carmen-Sucumbios Port was arrested Hector R., alias “Dentist”, who allegedly belongs to the third company of the 48th Front of the Revolutionary Armed Forces of Colombia (FARC). In addition, the Joint Command of the Armed Forces assured that the detainee has a warrant issued by Interpol for alleged terrorism and murder.

During the arrest, which occurred at 19h00, agents from the Joint Military Intelligence Command of the Armed Forces participed.

Since 2004 guerrillas heads have been arrested such as alias Simon Trinidad and alias Dumar (2012) whom was said to be the financial chief of the guerrilla. Alias Mario Lata was also arrested last year, who was identified as one of the leaders of the mobile column Daniel Aldana.