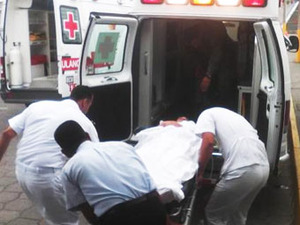 Corporal Edwin Leon, 27, born in the town of Hatuntaqui, was injured when an Armed Forces helicopter flew over the area known as El Pan, located in the border with Colombia, the vessel was attacked by unknown assailants.

Leon was admitted around 18:30 last Wednesday to the emergency room in Naval Hospital of Esmeraldas. According to the medical record, the patient presented with the bullet went through the inside of his left thigh.

Leon came out at 10:00 last Thursday on a ECU 911 ambulance service to be taken to the helipad North Operations Command, to be airlifted to the capital.