Ecuadorian Jose Tamay lost his restaurant in May because the building in which he operated was burned during the riots that followed protests over the death of African-American George Floyd, who was killed by a Minneapolis police officer. 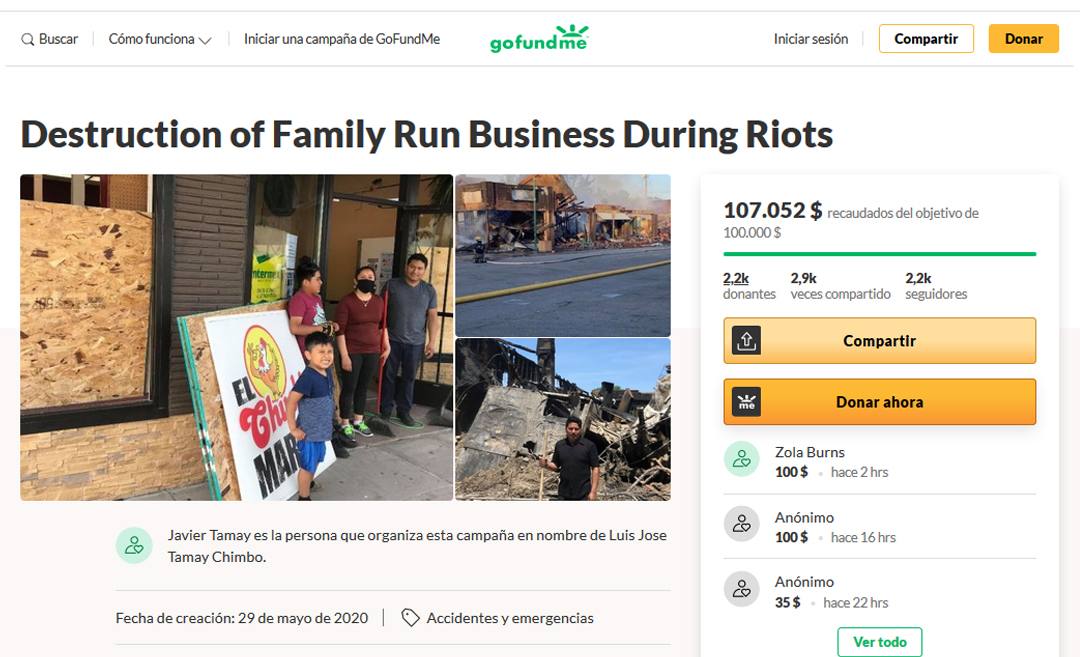 Tamay’s restaurant, El Sabor Chuchi, was one of several stores that were destroyed, but thanks to donations made by hundreds of people on the Gofundme financing platform – a nephew created a campaign to raise $ 100,000 to restart the business- may reopen, since according to Tamay, he had no insurance and had lost about $ 150,000 in everything he had invested in him. Until yesterday the donations formed a fund of more than 107 thousand dollars .

Tamay now comments that he is ready, but that he owned the business, not the building, and is waiting to see what happens in the negotiation between the owner of the building and the insurer, as he would like to start again in the same place as Lake street, a very commercial street and known as the “heart of the Latino”. Although you think that if the rebuilding will take too long you may have to think about moving your restaurant to another place, but it is the last option.

“In that place they already knew us and also to feel good… that is our idea. Thanks to God and the people we have reached the goal (of collection), not only with the help of friends from Minneapolis, but also from other states and other countries -including Ecuador- “, says Tamay.

Tamay opened his restaurant in 2014. The business served a mix of Ecuadorian and Tex-Mex food, as can be seen from his menu.

The entrepreneur comments that he is also thinking of expanding the menu and putting other dishes that are not fast food to receive all the people who have supported him and who have said that when he opens he will go to taste his food.

In addition to the Tamay restaurant, he has a minimarket called Chuchi Market, and although sales are still low, his income plus savings has allowed his family to support himself during this time. “Everything here costs. You have to pay the mortgage, the water, garbage, gas, electricity bills, every month, ”says Tamay.

The Ecuadorian, who has lived in the United States since 2003, adds that in Minneapolis everything is already quiet and he hopes that soon he can return to serve his diners. (I)