Ecuador’s Assembly denied the decriminalization of abortion for rape victims

The Plenary Session of the National Assembly of Ecuador denied the decriminalization of abortion for victims of rape and in cases of incest, stupidity or insemination not consented with 65 votes in favor of the proposal, 59 against and six abstentions, in the debate on reforms to the Organic Integral Criminal Code (COIP).

The vote was held on Tuesday, September 17, 2019, in Quito, and did not reach the necessary vote (70 votes) for the reform, at this particular point, to be approved. Five votes were missing for the proposal to be approved.

Assemblyman Guillermo Celi, from Suma, asked for the vote to be reconsidered, to which the Plenary did not give way. 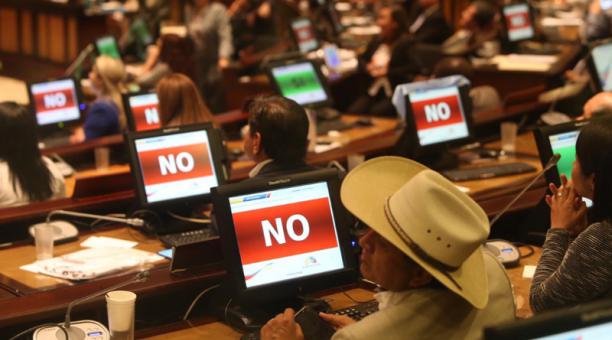 Articles 33, 34 and 35 of the COIP draft changes were intended to reform Article 150 of the Ecuadorian Criminal Law, which defines non-punishable abortion as “the abortion performed by a doctor or other trained health professional, which has the consent of the woman or her spouse, partner, close relatives or her legal representative, when she is not in a position to provide it. ”

The regulations provided that abortion will no longer be punishable “1. If it has been practiced to avoid danger to the life or health of the pregnant woman and if this danger cannot be avoided by other means ”.

The reform proposed by the assembly members proposed adding the numerals: “2. If the pregnancy is a consequence of a violation, incestuous violation and in the case established in article 164 of this Code. ”“ 3. If the embryo or fetus suffers from an acquired congenital or genetic pathology incompatible with independent extrauterine life, in any case of a lethal nature, determined by a health professional ”.

He also refused to add as a final paragraph of article 150, the following text: “In the case of numeral 2, it will be necessary that the pregnancy time does not exceed fourteen weeks of gestation and the preexistence of a sentence or resolution will not be required, it will suffice with the affirmation of the victim before the medical staff.

This statement will become news criminis to be investigated by the competent authorities. In the event that the victim is a girl or adolescent, authorization from their parents, curators or legal representatives will not be required for the practice of abortion under the assumption provided in number two of this article. For this purpose, the State will provide the necessary support so that its decision is free and informed. ”