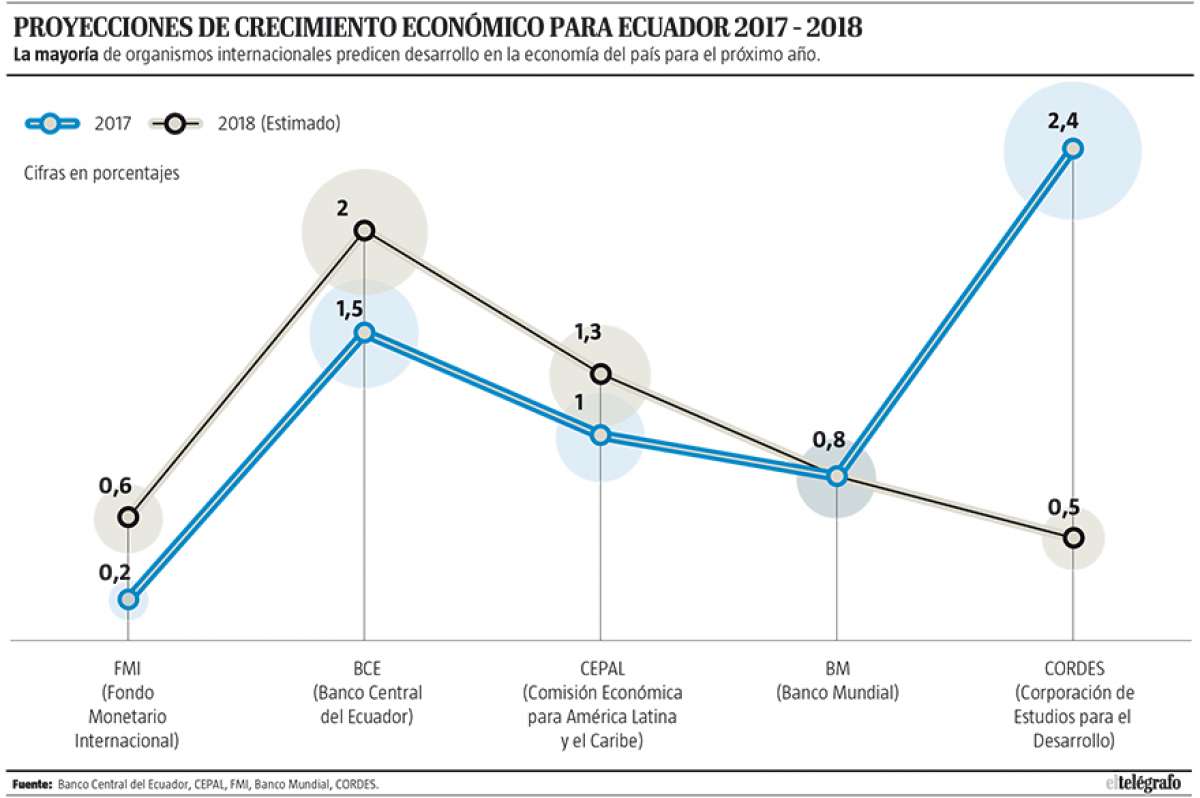 The economic rebound of 1.5% registered by the country in 2017 was thanks to consumption, while next year is estimated to be for investment. In its most recent update on economic growth projections, the Economic Commission for Latin America and the Caribbean (ECLAC) estimates that Ecuador will grow 1% in 2017 and 1.3% in 2018. “Ecuador will continue to experience economic recovery”, according to the agency in its report.

While the Banco Central del Ecuador forecasts a better economic performance, since for 2017 and 2018 it expects growth in the order of 1.5% and 1.6%; respectively. On the other hand, some research centers such as the Development Studies Corporation (Cordes) consider that it could even reach a growth of 2.4% in 2017. However, the International Monetary Fund (IMF), despite having improved its growth prospects, shows more cautious and, projects a slight growth of 0.2% in 2017 and of 0.6% in 2018.

For Walter Spurrier, economic analyst, between the conservatism of the IMF and the optimism of the government, “the most probable thing is that it is an intermediate growth”. Spurrier, who spoke at the presentation of the Economic Perspectives for 2018, at the Chamber of Commerce of Guayaquil (CCG), said that if in 2017 consumption was the engine of the economy, by 2018 it will be investment.

This is shown by the Banco Central del Ecuador figures: consumption growth in 2018 (1.3%) will be lower than in 2017 (4.5%) and investment will grow 3.6% in 2018, while this year it decreased by 13%. The production sector believes that although the economy is recovering there is a decline in productivity, economic growth does not have support from the policies of the National Government.

They warn that the proposed economic measures are incompatible with sustainable growth in the medium and long term, highlighting the urgency of supporting the private sector. “In order to recover productivity, we need security, clear rules and an atmosphere of trust, transparency and freedom,” says Pablo Arosemena, president of the CCG. While Cordes has the most optimistic projection of all agencies, warns that this growth does not imply a true recovery of the economy because it is based, mainly, on public spending (financed with new debt) and not on more investment. (I)