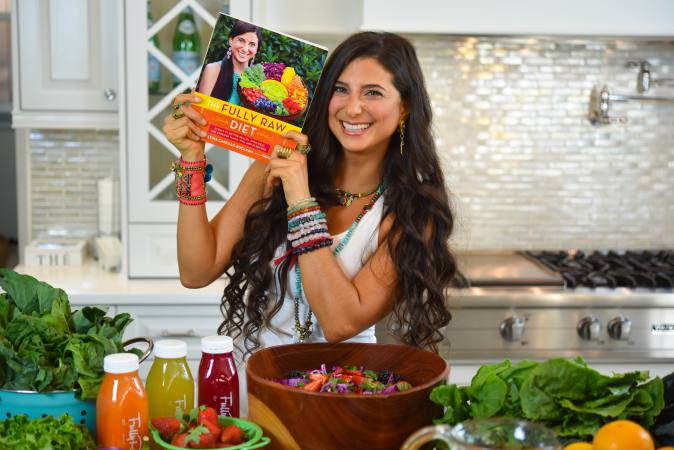 Fruits, vegetables, nuts and seeds. These ingredients, which in a regular diet could be mentioned as supplements for a recipe, are the basic diet and the only products consumed Kristina Carrillo Bucaram, a spokeswoman for raw veganism, who adopted this lifestyle -as a result of diabetes- when she was 18 years.

“A person I met told me that by changing my diet I could save my life. At first I thought I was crazy. I went back to the hospital because I was very ill, when I left I contacted him to show me. I started eating peaches for two weeks and I loved them and I started to feel a lot better, “says Kristina, born in the United States, daughter of a Lebanese mother and an Ecuadorian father.

A month later, her food was based only on vegetables and fruits, seeing the changes in her health. “I started to feel better, my skin was shining, my digestion was great and before my hair fell, and after eating raw it began to grow,” she says.

Her life change was difficult, she says, because being her mother Lebanese, food is part of her culture. And by stop eating it, it was like rejecting their traditions. “My mother did not talk to me for about four years, but after seeing that she no longer had diabetes, that she was doing better in school, she calmed down and is now almost vegan,” reveals the author of Fully Raw Diet. This publication, in which she shares recipes from the fully raw diet, has led her to visit several countries. Now his second work is in process, from which he prefers to reserve the title. “The fully raw diet means fruits, vegetables, nuts and seeds not cooked just prepared, it is not pasta, it is not meat, nor milk, nor rice, nor beans and the properties of this food are important because without cooking it has more vitamins, more minerals, food has life and with that you can heal your body faster. The food is more powerful, “she says

Before turning to digital platforms, Kristina started the community Raw Raw Organic, in Houston (USA), a market in which she partnered with farmers to sell organic vegetables and fruits at lower cost. The constant question of her consumers: what can I do with this? It motivated her to develop her channel on YouTube, in which she prepared recipes with the vegetables and fruits that they produced in her community.

These projects have also developed a line of healthy juices based on the fully raw diet.

Now, Kristina will have a series on Inti TV, on the internet, production with more than 20 episodes, in which there will be segments of interviews, food and varied themes related to her proposal of body, mind and healthy soul.

“This is important because I want to teach people to eat well, to maintain their energy and to be cured by their diet, to resort to it to be well.” Kristina Carrillo Bucaram, healthy influencer. (I)