Ecuador’s headquarters will be in Vitoria during the World Cup 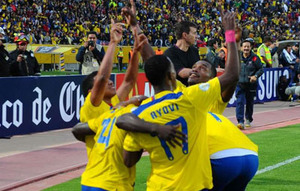 Ecuador goes to Vitoria in Brazil

Considering the characteristics of rival and host matches in the group stage, the authorities of the Ecuadorian Soccer Federation chose the Brazilian city of Vitoria for the Tricolor to focus prior to the tournament.

The city is located in the south of the country and is the state capital of the Holy Spirit. The metropolitan area of this port city has more than a million and a half people.

The Tricolor coach, the Colombian Reinaldo Rueda said Vitoria is a city that embraces all the features that the team needs to prepare for the group stage.

Ecuador integrates group E with Switzerland, Honduras and France. The Swiss will be the first match, on June 15 at the National Stadium of Brasilia. Then the Tricolor travel to southern Curitiba, to play against Central at Arena da Baixada, June 20. The third match against France, will be June 25 at the Maracana stadium in Rio de Janeiro.

Ecuador had initially chosen the city Caxia Do Sul, but finally decided to go to Victoria (Vitória in Portuguese).