The operation in Fruta del Norte, the largest gold mine in the country, started. The two underground tunnels that are part of the project enter and leave trucks with rocks the size of a basketball. 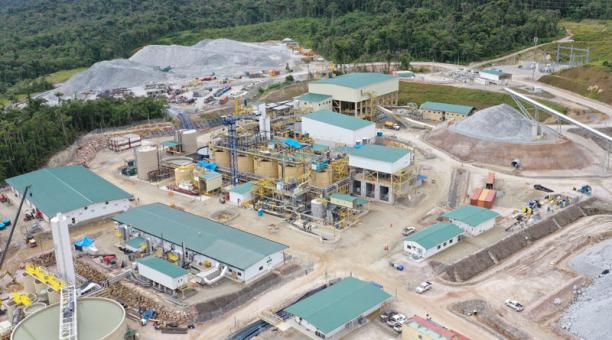 The material will be crushed and ground to a powder or gold concentrate.

At first glance it looks like sand stacked in mountains inside the collection center, but it is gold in a state different from the brilliant mineral seen in jewelry stores.

From this mine, six trucks will leave from December each day to the Port of Guayaquil. The ore exports will be sent in doré format (bars) and concentrated to the USA, Germany, Bulgaria and other countries.

The site was discovered 13 years ago in this area of ​​Los Encuentros, in the province of Zamora Chinchipe. In the 300 hectares of this land, which is in charge of the Canadian miner Lundin Gold since 2016, there is still vegetation typical of the tropical and humid climate of the Amazon.

And surrounded by that landscape is Camp Las Peñas, where the profit plant was built. This space has large machinery and infrastructure such as tanks and other systems that allow obtaining gold from the rock.

In the first phase of that process, two mills (one known as monilo SGA and another, as a ball mill) reduce the size of the rock. Then comes the phase of gold extraction, through a process of gravity and flotation in tanks, where gold is separated from the rest of the material.

Flotation consists of using air inside tanks with water to form a foam from which, in the end, the concentrate comes out.

The last phase is the leaching process, where the remaining gold is separated from the ore.

In Las Peñas there is also a camp that houses about 1,000 workers, although the highest peak was in the construction phase, when 4,000 jobs were generated.

The operation of the mine began yesterday November 14, 2019, with an inaugural act held in the concession area. Government authorities such as Vice President Otto Sonnenholzner participated in that event; the Minister of Energy, Carlos Pérez; and the general secretary of the Presidency, José Agusto Briones.

Fruta del Norte is an underground goldfield with probable reserves of 5.02 million ounces of gold, which began to develop in mid-2017 in the country.

Lundin Gold, which has invested USD 1 billion, expects to produce 310,000 ounces of gold each year, on average, in the 15-year life of the mine. Among the works developed are the process plant, water management systems, surface support facilities and 50 kilometers of roads.

“We are proud to inaugurate Fruta del Norte. It is the collective effort of all our teams. In addition, it is nice to know that Fruta del Norte will continue to contribute in tax, employment, local purchase, economic diversification, education and training terms, ”said Ron Hochstein, president and CEO of Lundin Gold, during the inaugural event.

Carlos Punín, mayor of El Pangui canton, stressed that Fruta del Norte will contribute USD 180,000 for a potable water and sewerage project that will be implemented in the Kunki sector.

“The project is being qualified in the Amazon Subsecretariat and we hope that in the next few days this is approved as a dream of citizenship,” he said.

Kelly Moncayo, president of the Parish Government of Los Encuentros, lamented that the Amazon sectors still do not feel in public works the economic benefits of the mining activity.

“In Los Encuentros there are 119.15 km of roads without asphalt and we are still without lighting. We hope you see the benefits in the community and your quality of life. We hope that mining is a strategic ally, ”he emphasized.

The Second President called on community and political leaders to support the management of legal mining and not use the “environmental flag” as a pretext to oppose this activity.

In Fruta del Norte a total investment of USD 2,700 million is projected and it is expected to generate 7,887 million in exports until 2034.

The State will receive USD 1,961 million for taxes, payment of patents, profits and royalties. This is the second large-scale mining project that begins to produce.

The first was Mirador, which is made of copper and is in charge of Ecuacorriente. The first 392 tons of copper concentrate from this mine were transported between Tuesday and Wednesday of this week to the port of Guayaquil.

In total, the first export will be 19 384 tons, which will take place in the coming days and will be destined for China. According to the Vice President of the Republic, the operation of the Fruta del Norte and Mirador projects represents 1% of the Gross Domestic Product (GDP) of Ecuador.

In 100 years the temperature of Quito changed 0.12 degrees