The dreaded rise in VAT was a scare. At least for now. It is one of the first clarifications made by President Lenin Moreno in his national chain last night.

“Listen to me well: we will not raise VAT! It will remain at the current level of 12%, ”said the president before listing a series of adjustment measures, with a view to cutting public spending and obtaining additional income, which focused on public sector employment, on subsidies to fuels and labor flexibility.

Several of the announcements change benefits or concessions whose modification was strongly answered in previous occasions and in previous administrations, such as subsidies or temporary contracts, were finally included in the economic reform that will be taken before the Assembly in order to correct the national course .

“The decisions I have made are delayed decisions for decades. Many of my opponents, critics and future candidates are not going to say it in public. But they say it in private, ”Moreno added, after motivating the measures in which“ the good ruler does not think about the next elections, but about the next generations ”.

Among the most controversial measures, the Government announced the release of diesel and extra gasolines to reduce the burden of $ 1.4 billion that subsidies to these fuels cost the State. The new prices will be effective as soon as a presidential decree is published. This decision was made to avoid raising the VAT, which, consequently, must undergo legislative reform. 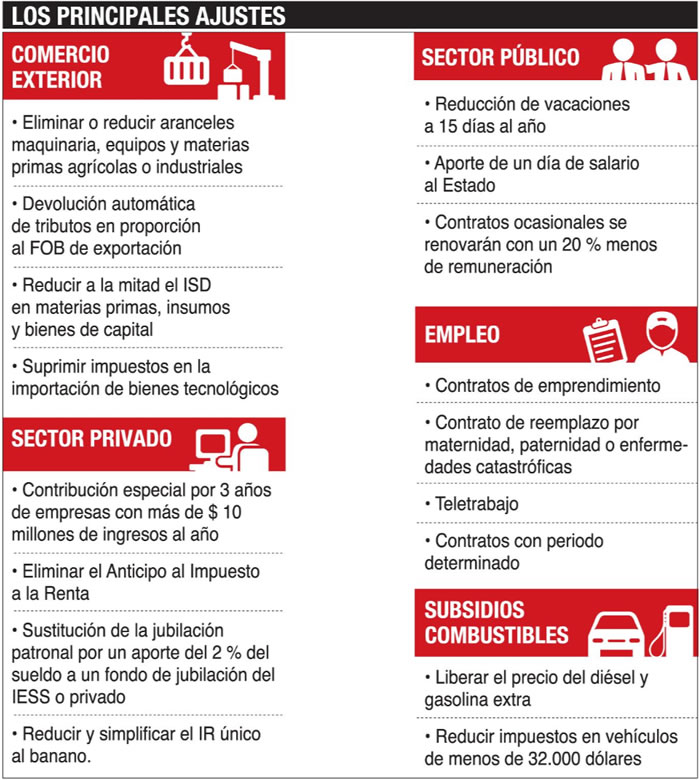 What will have to go through the Plenary Session will be a new labor law that will include new hiring modalities aimed at flexibility. Those who are hired under the new regulation may opt for several temporary modalities: the contract “for a specific period” or the “replacement” for substitutions for maternity, paternity and catastrophic illness. In addition, there is a new modality of entrepreneurship and teleworking.

Given the claims for the weight of employer’s retirement to companies, this figure will be replaced by a business contribution of 2%, calculated based on salary, to a fund, either of the IESS or private.

The new working conditions will apply for new hires. Workers who already work in a dependency relationship will maintain, as announced by the president, their acquired benefits.

Public sector workers will see their vacations cut in 15 days, to match those of the private sector, and in the case of public companies, they will contribute to the State with a payday. Occasional contracts and provisional appointments that are renewed will have a 20% cut in wages.

A tax is also imposed on the State for private sector companies that have annual revenues of over 10 million dollars. They must give a special contribution for three years for which the State will raise 300 million in total that will be used for public safety, health or education services.

According to the Superintendence of Companies, there are 1,537 companies that declared in 2018 to have revenues of more than 10 million dollars. The Government did not specify how the contribution of each will be calculated.

In terms of incentives, the advance to the Income Tax is eliminated and reduced by half – that is, it will remain at 2.5% – the Tax on the Exit of Foreign Currency in raw materials, inputs and capital goods that are included in the list of the Tax Policy Committee. In order to encourage foreign trade transactions, tariffs on machinery, equipment and raw materials of the agricultural and industrial sector are being “eliminated or reduced”, taxes on technological goods such as cell phones or tablets will be abolished, and taxes will be automatically returned to exporters in proportion to the exported.

Assembly receives proposal for early confiscation of assets due to corruption