In 12 days of protests, Petroecuador and foreign oil companies stopped extracting a cumulative 679,000 barrels of oil, which means losses of USD 61 million. 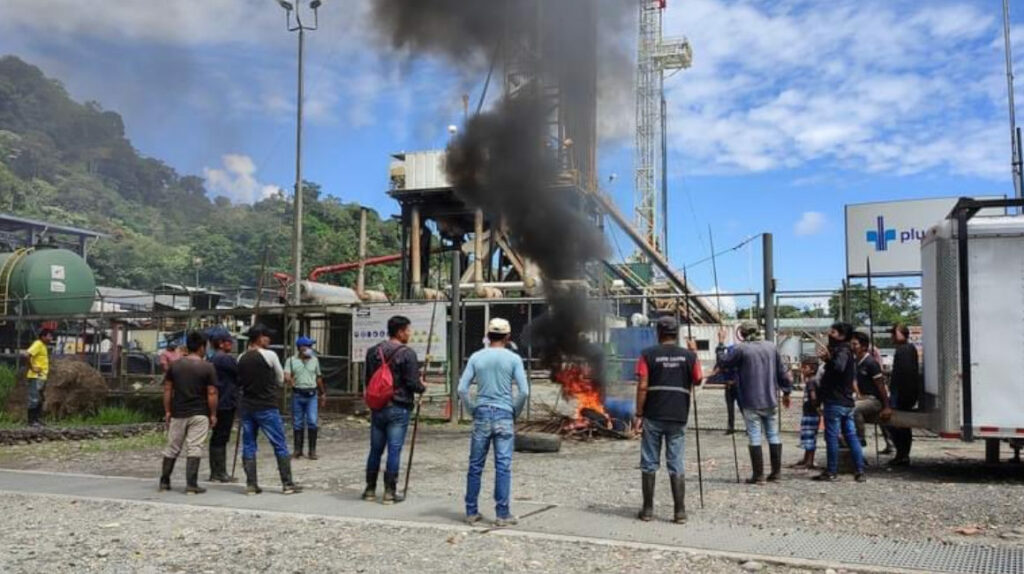 Demonstrators protest in the vicinity of block 10, run by the Argentine company Pluspetrol, as part of the national strike, on June 18, 2022.

Due to the national strike, Ecuador has stopped extracting 51% of the oil in its oil fields.

The drop in oil production has deepened as the national strike progresses , called by the Confederation of Indigenous Nationalities of Ecuador ( Conaie ).

And on June 23, Ecuador extracted 256,506 barrels ; that is, 242,499 barrels per day less with respect to the volume registered the day before the start of the mobilizations.

During the 12 days of strike , the state oil company Petroecuador and foreign companies have stopped extracting a cumulative volume of 679,000 barrels of oil .

With that, the losses add up to USD 61 million , said Energy Minister Xavier Vera-Grunauer.

As of June 24, 918 oil wells have been shut down in the Amazonian provinces of Orellana, Sucumbíos, Pastaza and Napo.

Petroecuador , which extracts 79% of all Ecuadorian oil, records the biggest losses.

On June 23, the production of the state oil company stood at 203,540 barrels; It is 185,915 barrels per day less than the volume extracted on June 12, according to data from the Energy Regulation and Control Agency (ARC).

During the 12 days of national stoppage, Petroecuador has not been able to extract a cumulative 548,298 barrels. In contrast, foreign oil companies were unable to produce a cumulative 131,030 barrels.

Until June 22, Petroecuador calculated that it stopped receiving USD 45 million in income due to the drop in production .

Of the 918 wells closed so far in the national oil sector, 781 are from Petroecuador and the rest from foreign contractors.

Petroecuador had to paralyze 31 drilling towers. To this was added the suspension of operations of the Trans-Ecuadorian Oil Pipeline System (SOTE) .

This pipeline, the main oil artery in the country, had to stop its activity due to the lack of oil to transport.

Under these conditions, Cedeño explained that he calculates that Petroecuador could stop its production operations in three or four days .

In an interview with Teleamazonas, the Minister of Energy said that these are not simple protests against the seizure of wells and oil fields, but planned actions .

Protesters have forced the closure of strategic wells and pipelines , the official added.

The roadblocks that prevent the mobilization of workers and inputs also cause losses in the mining sector .

Vera-Grunauer explained that two small mining companies had to stop their operations.

The Ministry of Energy reported that the daily losses of small mining would add up to USD 12 million.

“Cacerolazo” for Peace in Quito