Complaints about pressure, threats and the constant exposure of videos regarding the clashes between protesters and the security forces during the fourteen days of the strike were the tone of the second day of debate in the National Assembly, which will have to resolve the request for the removal of the president of the Republic, Guillermo Lasso. 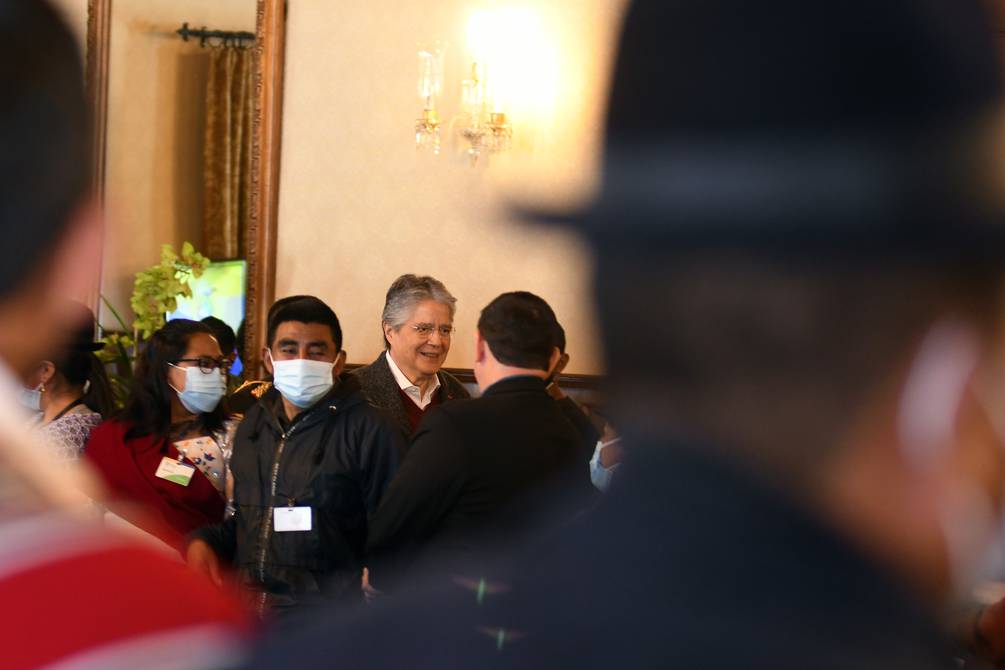 Guillermo Lasso, President of the Republic, during a meeting with the Union of Indigenous Organizations of Cotopaxi residing in Quito, in the Banquet Hall of the Carondelet Palace.

The reinstatement of session 782 took place at 4:20 p.m., electronically, with 137 assembly members, immediately starting the debate with the legislator of the National Agreement Caucus (BAN) Gruber Zambrano, who denounced that the legislator of UNES Viviana Veloz requested that he be declared persona non grata for Santo Domingo de los Tsáchilas for not agreeing to overthrow the government of Guillermo Lasso, for not supporting violence. That he is a person of peace and dialogue, which is the way to get the proposals.

This political sector that is related to the Government, through the legislators Marco Troya, Pedro Velasco, Washington Varela and Vanessa Freire, anticipated that it will not support the application of article 130, number 2 of the Constitution, which proposes Correismo due to a serious political crisis and social shock.

On this second day of debate there were also complaints from pro-government legislators from CREO and the Democratic Left about pressures they receive through phone calls, visits and demonstrations with shouts in front of their homes to support the removal of Lasso.

Legislator Patricio Cervantes (CREO) denounced before the plenary session that minutes before his speech a group of people from the Caranqui people came to his home in the city of Ibarra with banners and shouts in order to pressure the decision to be taken by the Assembly and that this not only happened to him, but also to his co-idea Blanca Sacancela, representative of Pichincha, and that there were people who tried to enter his home.

It is important that the country knows how pressure is being exerted to twist the will of the assembly members, Cervantes stressed, but no matter how many people they send to put pressure on them in their homes, frightening their families, they will not allow a coup d’état “by a group of mafias allied to drug trafficking and narcoterrorism who want to destroy the technical order,” he noted.

Ramiro Frías, from the Democratic Left caucus, denounced that he received phone calls and text messages demanding that he vote for the removal of the President of the Republic, but that he will not do so because he is in favor of defending democracy and institutionality.

That Ecuador has identified the destabilizers, that no one wants them anymore, that in recent days the UNES assembly members wanted to take advantage of the Conaie demonstrations; that his bench will defend the institutionality and that he will not lend himself to destabilizing insinuations.

His excoideario Alejandro Jaramillo anticipated that there are no votes to apply art. 130 of the Constitution to the President of the Republic, for which he proposed to suspend the session and wait for the Government to respond to the ten points claimed by Conaie.

Marcela Holguín, Juan Lloret, José Vallejo, Paola Cabezas, Fernando Cedeño, José Agualsaca and Luisa González intervened from the Union for Hope (UNES) bench; they insisted to the room that in their hands is the democratic way out against the requests of the social sectors that demand new living conditions.

Cedeño presented the motion to approve the resolution for the dismissal of the President of the Republic, Guillermo Lasso, contained in 31 pages and which proposes five articles, where in addition to the dismissal, due to a serious political crisis and internal commotion, it provides to notify all functions of the State and immediately summon Alfredo Borrero to take office and be sworn in as President of the Republic.

After analyzing the facts, the draft resolution includes four conclusions, one of which states that “Guillermo Lasso Mendoza, President of the Republic, has not been able to prove the non-existence of the serious political crisis and internal commotion that the country, evidenced by the actual occurrence of events that seriously threaten security, institutionality, the exercise of a normal coexistence of citizenship and the exercise of constitutional rights that, in short, cause deep social alarm, as based on this resolution, a situation that is aggravated by the political conflict and the crisis of legitimacy of the president, expressed in social discontent, mistrust,disapproval and ignorance of the political representatives and authorities of the various functions of the State, which is finally expressed in the accumulated and repeated strikes, public protests and popular mobilizations”.

That the repeal of the state of exception through Executive Decree 461, as an act of its own, is insufficient to overcome the cause determined for the application of numeral 2 of article 130 of the Constitution of the Republic, since both the constitutive material facts and its effects remain in force and configure, in their different levels of assessment, violations of rights contemplated in the Constitution and in international instruments.

Legislator Paola Cabezas in her speech commented that they know that some benches do not share their approach, but that they cannot be called coup plotters because with the Constitution in hand they are exercising an attribution. No more commotion, political crisis and lack of control can be tolerated, the UNES bench has taken the initiative and it is up to the entire Assembly to make the decision.

Surely some members of the Assembly, counting, adding and subtracting, will believe that there will not be enough votes to make a decision on Article 130 of the Constitution, but it seems that this Parliament will not save the people; and that “this battle does not end here, there are other constitutional instruments that will allow the decision to be made, President Lasso, remember that a revocation of the mandate is on the way,” he warned.

The majority of the Pachakutik bench spoke out for being together with the social protest and through legislators Joel Abad, José Chimbo, Celestino Chumpi and Cristian Yucailla anticipated that they will vote for the application of article 130 of the Constitution, and this group of legislators asked the Government to comply with the ten demands made by the indigenous movement. He rejected the official discourse that links indigenous organizations as allies of drug trafficking.

This political sector reproached the regime for the aggressions received against those who are in the protests, that there were excesses by the public force which caused deaths and injuries.

It was learned that at least four legislators from this caucus will vote against or abstain from the motion to impeach the president.

Instead, the rebel Pachakutik group, through assembly members Mario Ruiz and Patricia Sánchez, ratified that their vote will be in favor of the dismissal and also denounced the excesses of the National Police and Armed Forces.

Mario Ruiz pointed out that there may not be the votes to remove the President of the Republic, but that the people will continue in the streets and announced that the crimes committed during the social protest will not go unpunished.

On the second day of debate, the session lasted seven hours and was suspended at 11:20 p.m. when the president of the legislature, Virgilio Saquicela, convened for next Tuesday, June 28, at 11:00 a.m. He indicated that the National Electoral Council and the Economic Regime Commission of the Assembly were notified of information that he said he presented as a defense of the reasons for the impeachment request. (YO)