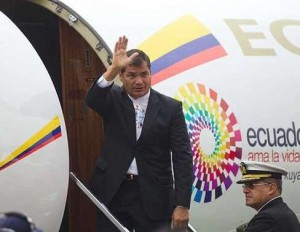 President Rafael Correa is visiting the United States with the objective of managing cooperation in the educational area, strut interest of the Citizen Revolution, according to the President himself.

Today begins Correa’s agenda in the U.S. states of Massachusetts and Connecticut; and the city of New York where he will be accompanied by a delegation of officials.

According to the agenda, the President will meet tomorrow with the President of the Massachusetts Institute of Technology, Rafael Reif. On Wednesday, instead, he will talk to Drew Faus, who is President of Harvard University.

Likewise, he plans to visit Harvard and Yale Universities to seek cooperation agreements for the Ecuadorian academy.

On Friday, he will travel to New York to meet entrepreneurs and Ecuadorian immigrants; and finally, on Saturday, the Weekly National Adress will be held from that city.